To be honest, I would have been disappointed if my Oliver No. 9 from eBay had arrived in functional condition – it would have deprived me of many hours of pleasant tinkering.  I chose this Oliver primarily because she didn’t work.

However. It does break my heart a bit that she was dropped on her head sometime during her trip from the Midwest USA to California.  She arrived in a loosely-packed and damaged box with a bent right tower.

Fortunately, her cast iron hide saved her. At the base of the typebar towers are cast iron pillars that I hope protected her delicate insides from harm.

I made a couple long-winded videos documenting my problem. Here’s my video of my partially disassembled Oliver that describes the problem:

Here’s another video showing the under side of the machine.

For reference here are two pictures of the Oliver’s original condition on arrival. Remember: she was really bad. 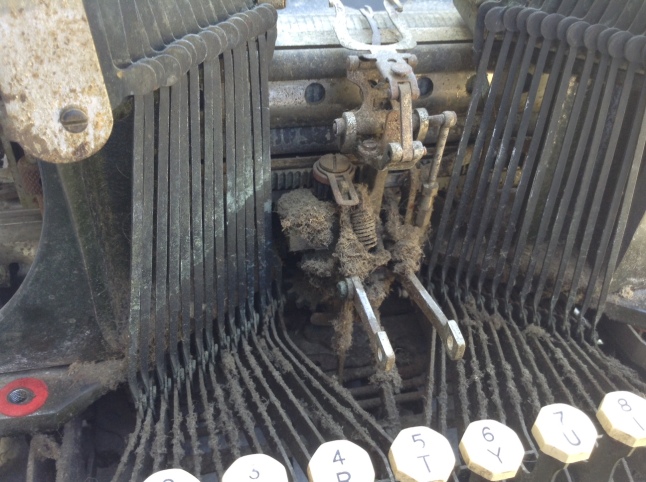 BEFORE: There was a fair amount of rust underneath and parts that seemed like they should move, didn’t move.

After cleaning and de-rusting, the escapement mechanism seem to be turning smoothly. The rusty spots under the machine are cleaned up, but I am not sure how much movement I should expect under there.

Here are my two questions for the Typosphere:

If you have any thoughts, please let me know in the comments. I am determined to sort this out with help from the typewriter community.

Those are some very bent typebars.