I was out and about today and stopped in at a few town thrift stores looking for brown plastic cases for Operation: SCM Datecode.  I  didn’t find any, but I did run across this lovely but very dirty Royal Aristocrat.

My collection is a little Smith-Corona / Corona heavy and I have been thinking I should branch out and see what all the fuss is about other typewriter brands: the Royals and the Underwoods etc.

This Royal was filthy. Not a problem – I like to clean things up.  The draw cord was broken.  I can fix that (probably).

What is wrong with people?  You know, we are living in a SOCIETY.

I left the shop feeling irritated not just at the key-chopping but at the sheer half-assedness of the evil doing. It appears that the chopper took a few keys, got bored and quit. And they took the Shift Freedom keys.  So mean.

I thought about the typewriter all day. Its ultimate fate would probably be to have the remaining keys clipped off and the body dumped in a scrap heap.  NO. IT SHALL NOT BE. Not while I have $30 in my pocket!

I went back and took the Royal Aristocrat into protective custody.

A damsel in distress

Could use a bath

S/N under carriage on left

A lady of gentle birth

Not all the keys chopped

About those missing key tops:  a clever typospherian at Typewriter Talk salvaged a key-chopped typewriter with faux craft keys.  I swung by my Joann Fabrics and picked up similar items for $5.00:

I’ll clip off the loops on the faux keys, print out Royal Aristocrat style letters and attach the faux keys to the broken stems…somehow.

Last thing: did I mention that she is really dirty? I had problems finding the serial number because it was under a layer of filth.  Anyhow, while I was turning her over trying to find the serial number, a piece of metal fell out. Oh lordie – where does that go?  Fortunately, it wasn’t a typewriter part, but an old watch face that fell out.  What other secrets do you hold, Aristocrat? 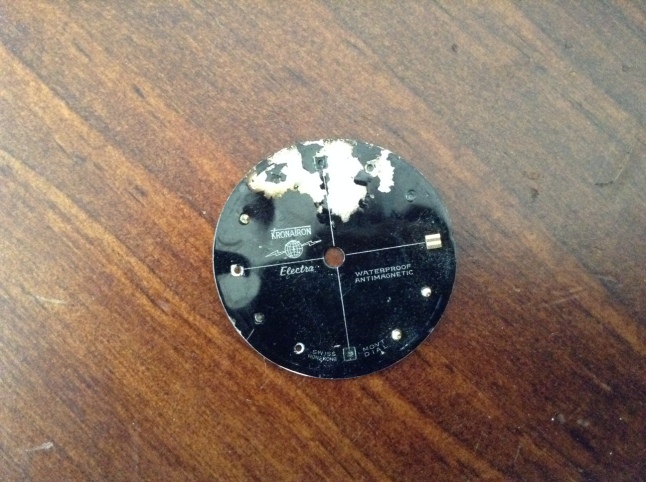 Not a part of the typewriter. Whew.

14 thoughts on “A Lady in Peril Rescued: Royal Aristocrat”