Typewriters may come and typewriters may go, but I’d like to keep my standing in-house collection under double digits.  We’re a family of many hobbies and collections and our home is already bursting with fun stuff. I could use a barn.

Also, I’m not really into amassing a huge collection of typewriters – I’m not looking to acquire a Corona Four in every color. And I really like junkers – I like to clean and make them functional.  It’s very satisfying.  For the most part, once they are working, they start to lose their grip on me.

It was really dirty – gunk inside and out and dried mud on the top cover.  She wasn’t typing at all. The draw band was off and wrapped under the carriage. All the keys were frozen in time. So bad.  So very bad.

I brought the typewriter home and pulled out my handy-dandy air blower thing and blew out layers of dust and cobwebs, being careful to work in a semi-enclosed area outside in case I blew out a loose part.  As I examined my foster child a little more my closely, my heart sank when I realized that not only was her drawband off, but her mainspring moved very reluctantly.  That’s why her intact drawband had fallen off.  The drum wasn’t moving.  No zip.  It turned as if it were moving through dried gum and did not bounce back.  I doused the mainspring drum with PB Blaster penetrating lubricant and hoped for the best.

I removed the drawband since it was tangled up under the carriage and cleaned and lubricated the rails. I was flummoxed when I got to the the top cover.  It didn’t pop up like my other typewriters.  I had to remove four screws to remove the top cover – one inside each spool container and one at each back corner of the cover. Rob Bowker has an excellent post on accessing the insides of a Royal KHM that I unfortunately found after all was done. 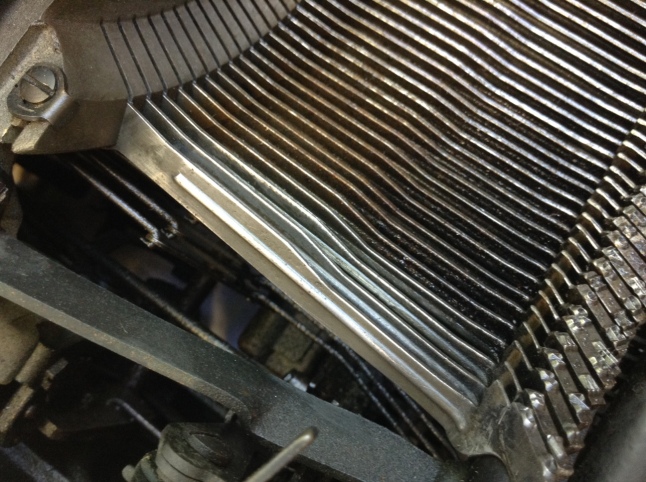 I started working the keys, loosening things up and flushing the segment with denatured alcohol.

The keys looked better after just a clean with a Q-tip: 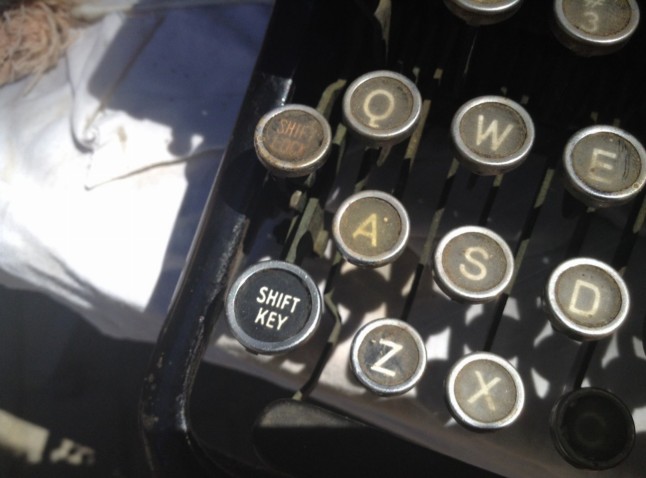 I tested the mainspring and HURRAY!  It was loosening up after PB Blaster treatment and was winding and zipping with some authority.  I re-attached the drawband and off we went. The carriage was a little grudging at first, but moving it back and forth repeatedly freed it to move smoothly. What a great feeling. 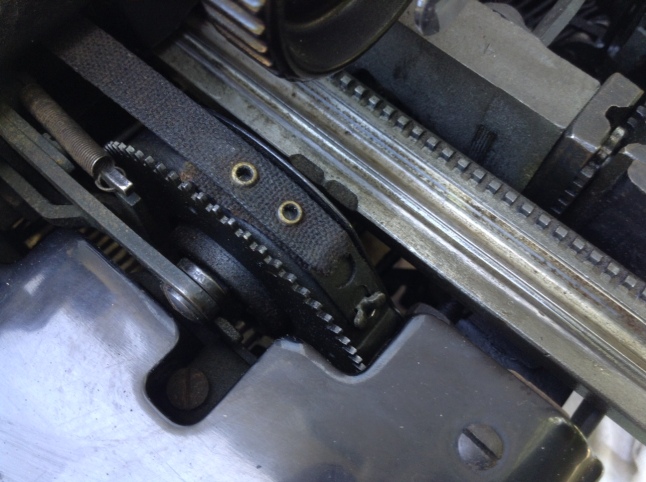 Hooked up and spinning again

I washed the outside case with warm soapy water first to get the worst of the mud off. I then used Scrubbing Bubbles to remove the residual grime, being very careful to avoid the decals (which were already very faded).

I rejuvenated the old, ripped ribbon with WD-40 and carefully rewound the ribbon. I put the top cover back on temporarily and tested the typing.

The Royal KHM is typing like a champ right now.   No letter piling. When I first put paper in her, she had a couple lines with an erratic left margin, but that disappeared and I have typed out two full pages single-spaced without margin issues or letter piling. It makes me think that I should re-visit my Royal Aristocrat with margin issues and give her a second deep cleaning.

I felt bad about the ratty WD-40ed ribbon – it was printing OK, but it was sort of rotten and holey.

I had just ordered some ribbons from Amazon so I threw in a new red and black one.  Classy!

I had some auto wax and spiffed up the outer case.  Here are some glamor shots I took before I returned her to the junk shop:

Can I talk to you?

Moe at the junk shop was thrilled to see the transformed KHM. I took a page from TypetheClouds’ book and sent the Royal KHM back out into the world with care and feeding instructions. In the future, Moe will gladly let me take junker typewriters home for clean up.

I was reluctant to let this Royal KHM go.  She went from congealed paralysis to being my fastest, snappiest and springiest typer. What a bright, happy typewriter!  I have read about the Royal’s quick and snappy touch.  It lives.

I think this new system of catch, clean and release may really work out for me. I get to experience new and exciting typewriters regularly without typewriter accumulation and the world gets functional typewriters. Typewriter fostering is a win-win in my book!