It’s October and here in the US that means Halloween. I’m not much for the scary, gory stuff, but I do like a cheerful jack-o-lantern or two. And I like all the candy that I steal from my daughter’s trick-or-treat bag.

And now as the leaves have started to fall, Moe from Mozo’s gave me a call. A friend of Moe’s had a Royal HH that needed a look-see. I brought the HH home and took it out to the back patio to investigate.

It wasn’t too bad: a little gummy, a little dirty on the inside. Its worst problem was that it was cursed with one of those awful black and white correctable ribbons. The horror!

The first thing I did was cut that thing out. So much better: 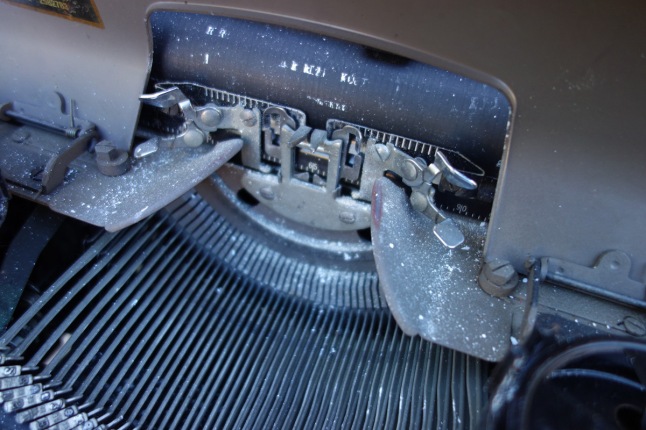 I blew the inside out carefully with my Datavac Duster:

Despite being a nondescript muddy gray, this HH has wonderful style – the lines are very appealing.

I assembled my supplies for cleaning: 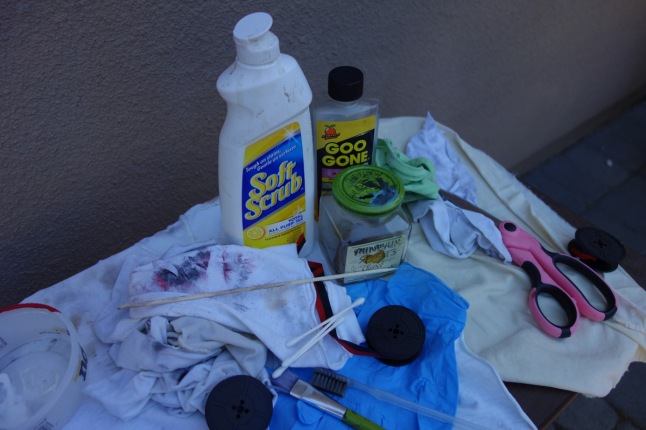 After draping the shell carefully with rags, I scrubbed the type slugs and segment with mineral spirits.  After a first cleaning pass, the typebars were all swinging easily.

I then wiped out the eraser crumbs, gunky fluff, and correcting tape dandruff with a lightly damp rag and Q-tips. I vigorously scrubbed the platen with Soft Scrub to remove embedded white of the correcting tape.

The keytops had the frost often seen on Royals of this vintage. A lot of people call it mold or fungus, but I think it’s a chemical precipitate that affects plastics of the era. That sounds xtra-science-y.

I wiped the key tops down with Goo Gone and the white coating came off. 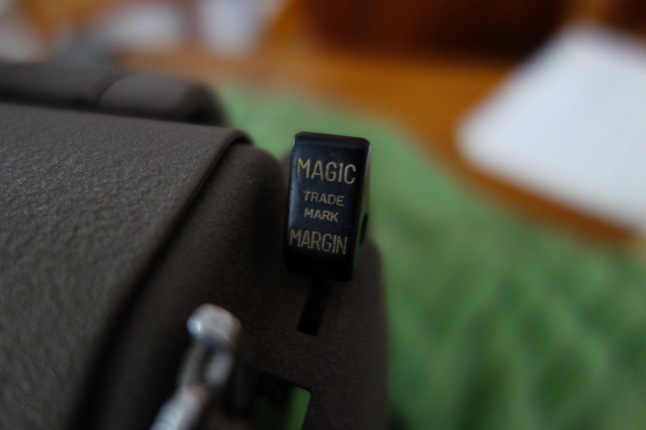 The old metal spools are the distinctive Royal style.  I wound new red and black ribbon onto the old spools and tested.

Lovely! When I first started typing, the left margin was a little “soft”, returning irregularly to the left. I find that Royals often exhibit this behavior.  Fortunately, the erratic left margin seemed to work itself out with exercise. 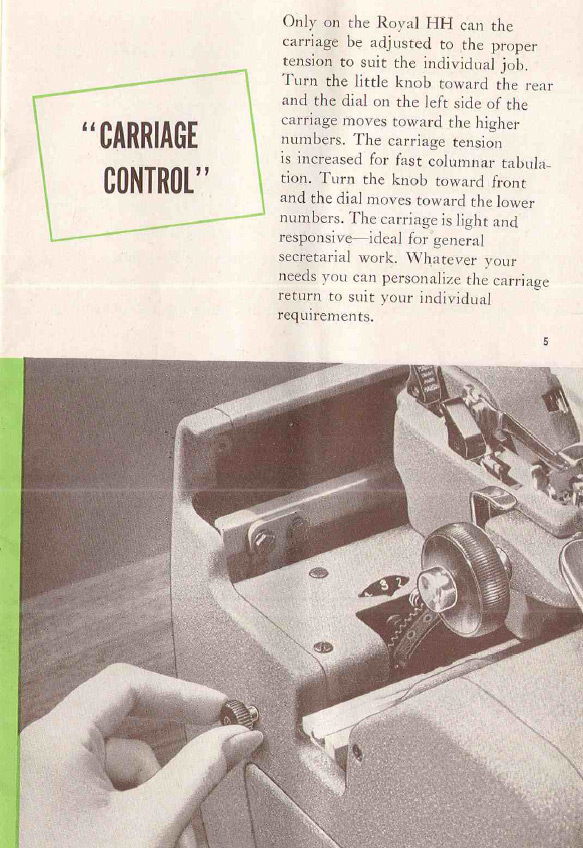 I played with it, turning it up and down and felt no difference. Perhaps the machine needed more cleaning to appreciate the subtleties of the control.

T. Munk posted recently about a similar feature on Royal portables of the early 50s.

Moving on, here’s a picture of Herb Caen, a well-known San Francisco columnist who swore by his “Loyal Royal”.

It’s hard to say whether the HH pictured above was his favorite – apparently he had four “Loyal Royals” including the Royal FP below.  Really, Herb, what a player!

“Loyal Royal,” typewriter of Herb Caen, longstanding columnist of the San Francisco Chronicle, on display in the lobby of the Chronicle Building on 5th Street in San Francisco, CA. By Uyvsdi (Own work) [Public domain or Public domain], via Wikimedia Commons

This HH is a serious typist’s typewriter.  It’s got a palm tabulator: 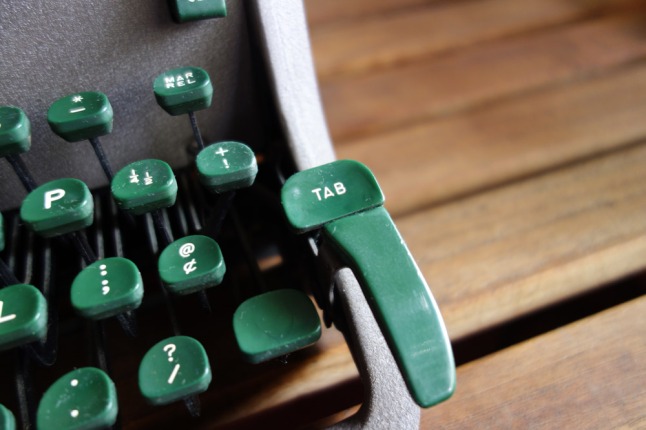 If this HH had had a dirtier shell, I would have pulled out the Scrubbing Bubbles and a tooth brush and cleaned the crinkle paint exterior.  However, the HH was pretty clean to start with.  I only needed to wipe down the outside with a damp cloth. Here she is, sitting pretty on my front bench.

I am going to call this model a Royal Happy Halloween from now on. I have heard tell that the Royal HH was named for Henry Hart who patented the Magic Margin for Royal in 1938. HH could also stand for Hello Handsome, Head Honcho, Heigh Ho, Hip Hop, Holy Hell, Happy Hunting and more.  Happy Halloween seems appropriate for this time of year. 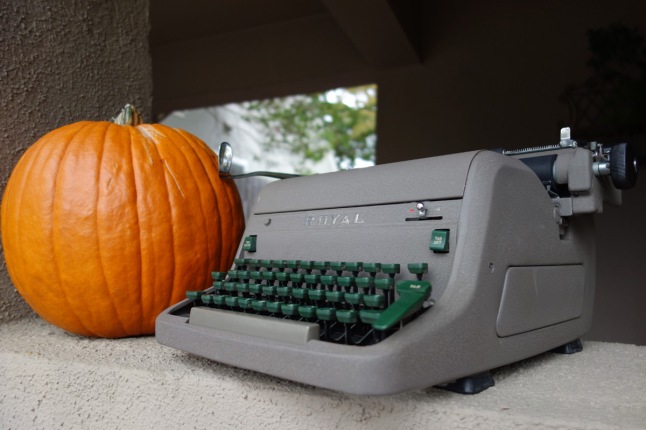 I took the Royal HH back to Moe’s with care and feeding instructions. I am sure that the lady who owns it will now be able to hammer out The Great American Novel.  What a sweet machine.

I got an email from Jenn at the Shop at Flywheel Press and she just got a new typewriter for the Shop. It had belonged to a friend who moved to Hawaii and couldn’t afford to bring the typewriter along, so she gave it to Jenn.  It wasn’t typing and Jenn thought maybe it had a carriage lock engaged. I went over to scope out the situation.

When I arrived at the Shop, Jenn was conducting a kids camp.  I could hear the happy tappity-tap of typewriters as I walked in.  Heart-warming! 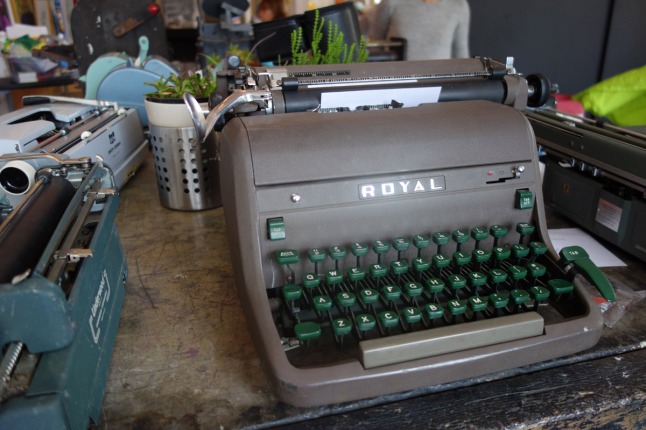 Here’s the new girl. Really, another HH! I call this one a Royal Hardly Hawaiian (since it didn’t make it off the mainland).

After poking at it a minute or two, I determined that the margins had been set close together so the carriage couldn’t move.  Damn you and your mysterious hidden workings, Magic Margin!

I got the margins in order and strung a new ribbon on her, and soon she was typing away happily.  I’ll be back to give her a good clean and enter her into TWDB.

I strolled around the Shop and checked the other typewriters. One or two had ribbon issues which were soon remedied, but all were typing.  My cheesy fixes like the duct-tape clevis repair and the paperclip spool spindle ARE STILL FINE despite all the little kids hammering on these typewriters.

Looking good, ladies. Til next we meet.