I was running errands on foot when I came across a neighborhood thrift store that I had never been in before.  I went into this teeny crowded thrift shop and saw a typewriter. 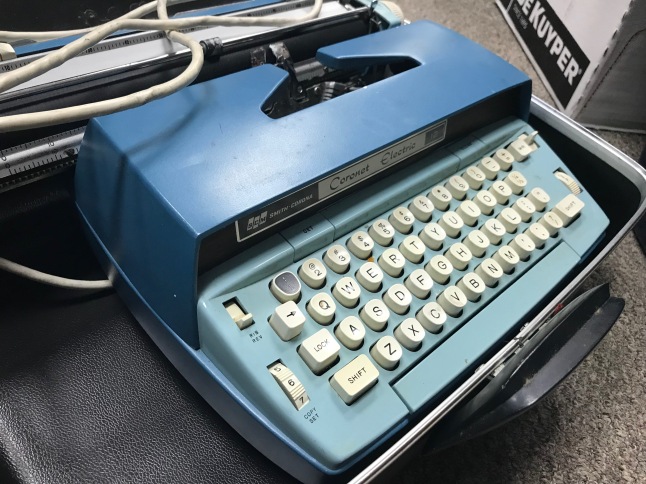 Not just one but two typewriters. Look!  Over there! 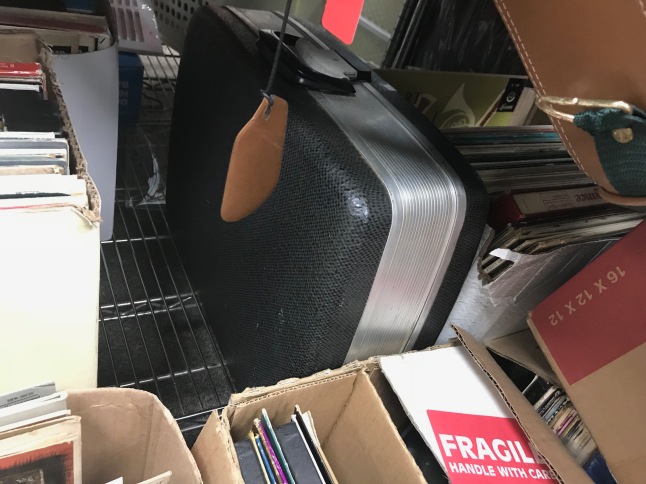 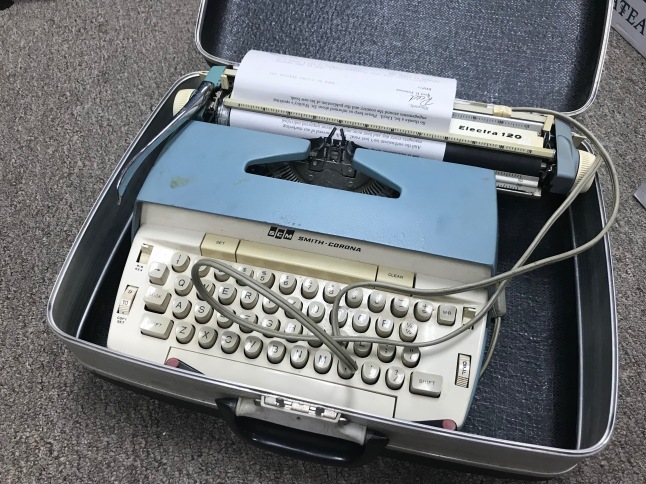 I decided to take the Coronet since the paint on the Electra 120 wasn’t in great condition. The Electra is pretty cute (I have a thing for blue typewriters) and I might come back to play with it.

I tested the Coronet in the shop.  The lady at the register oohed and aahed over the pretty two-tone blue Coronet and said that even if it didn’t work, it would look cute on a shelf.

I plugged it in, turned it on, and it made a horrible sound that freaked out everyone in the store.  It began to type multiple letters spontaneously.

And the carriage slipped and wouldn’t catch, flying over to the left.

Cute, but messed up. I think the proper term is #cutebutpsychobutcute.

I have seen the haunted typer situation before, a Smith-Corona Electra 210 that repeatedly typed the number 5 when initially turned on.  When I saw the Coronet acting up at the thrift store I said, Oh! Oh! I think I know what’s wrong here.  I felt like Hermione Granger hopping in her seat and waving her hand when she knows the answer in class.

A haunted Smith-Corona Electra 210 with mysteriously repeating "5" key. Another #typewriterrepair

I figured the Coronet was worth $10 just for the fun.  I felt confident that I could fix the haunted typing issue and had a pretty good idea of what might be wrong with the carriage that wouldn’t catch.

I took it home, removed the bottom plate (two screws) and blew out the dust and dirt in the guts.

I confess that I am not 100% comfortable with most electric typewriters, but this Coronet looks just like a manual typewriter with a small motor. It even has a manual carriage return, so no complicated carriage return clutch to deal with. 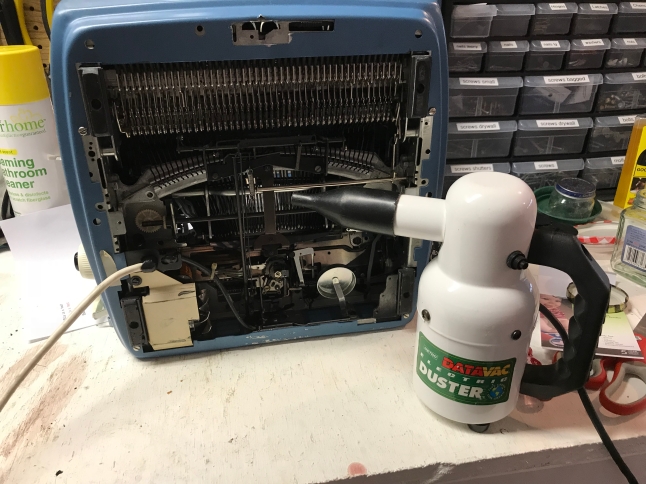 I immediately saw a problem area in the levers and linkages under the keys: 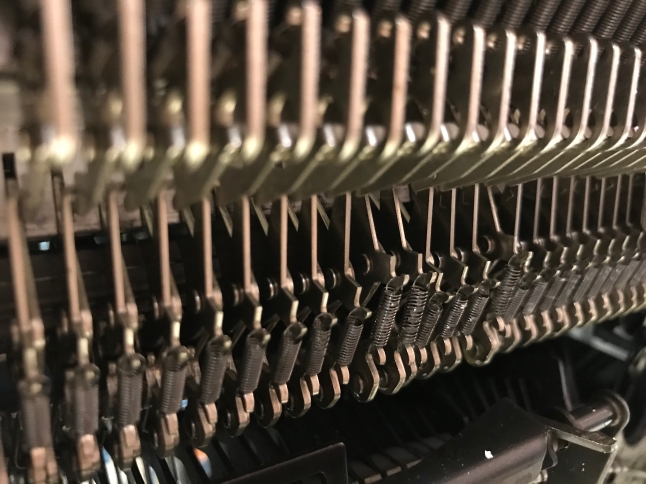 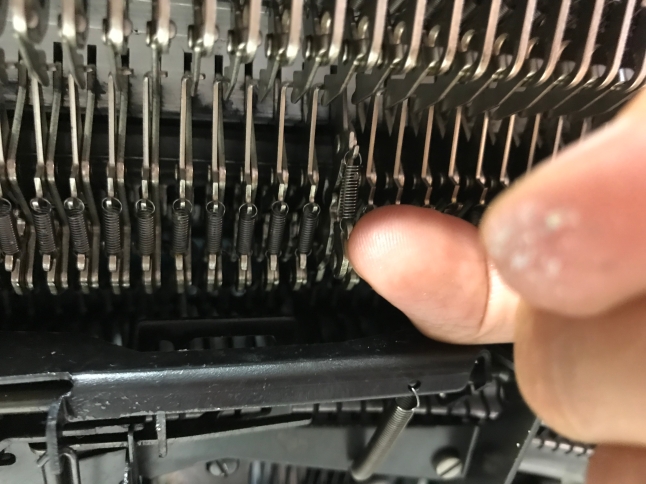 From the top, on the keyboard, the letter “B” was immobile.  I was not able to depress it.  I found its linkage underneath and cleaned and cleaned and eventually it came free.

I flipped the machine over and hurray, no more haunted typing.

I then turned my attention to the slippy and sliding carriage that wouldn’t “catch”.  The Lettera 22 I brought home recently had a similar sliding  carriage problem which was solved by cleaning of the escapement area. The Lettera 22’s escapement is either buried or weird looking because I didn’t immediately spot anything familiar.  I simply cleaned and lubricated in an area where an escapement *might* be and hoped for the best.  Fortunately it fixed the sliding carriage right off the bat.

The escapement on this Smith-Corona is very accessible.  It makes cleaning so easy.  I doused the area with mineral spirits and worked the parts with my fingers.  I checked the carriage.  Still not catching.

I then doused the area with PB B’laster and followed up with denatured alcohol.  Nope, no luck.  The carriage was still sliding. 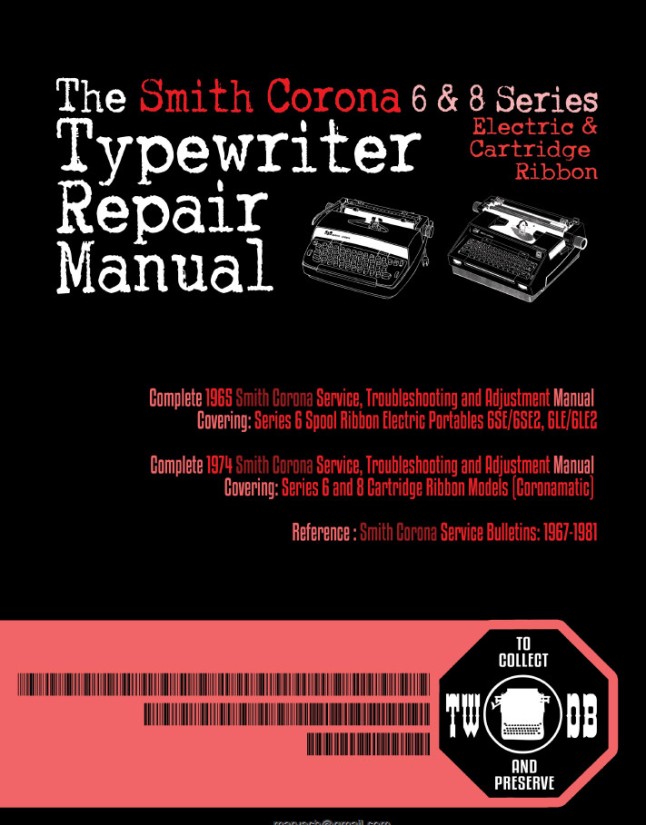 He has archived a whole collection of typewriter repair manuals at TWDB Operation OOPRAP.

I figured that it was an escapement problem since that’s what most internet resources point to when a carriage is wayward.

I read through the troubleshooting section of the manual and wondered if the escapement pinion gear was meshing properly with the rack.  I couldn’t see very well and decided to pop out the platen.  Fortunately, Joe Van Cleave has a great video on a manual Galaxy 12 (a non-electric twin of my two-tone Coronet) and at around the 10:02 minute mark, Joe describes how to pop out the platen.  So easy!

So I popped out the platen. This is going to make cleaning the hardened Wite-Out off the platen and plastic guides a lot easier too. 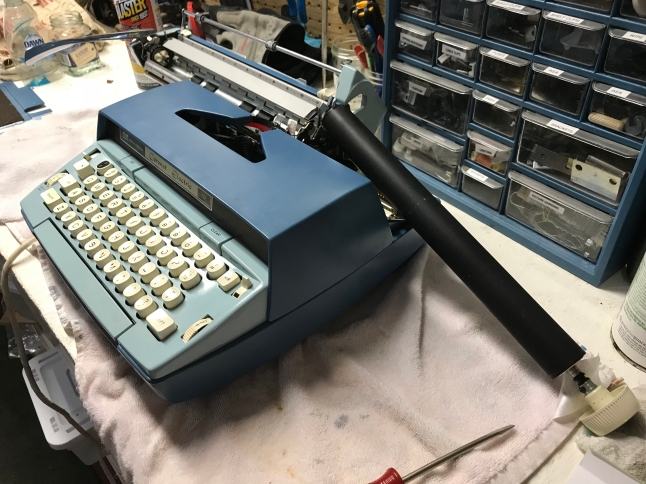 I peered under the carriage. There was more light with the platen out. The pinion and the rack seemed to meshing just fine. Back to the escapement in the underbelly. 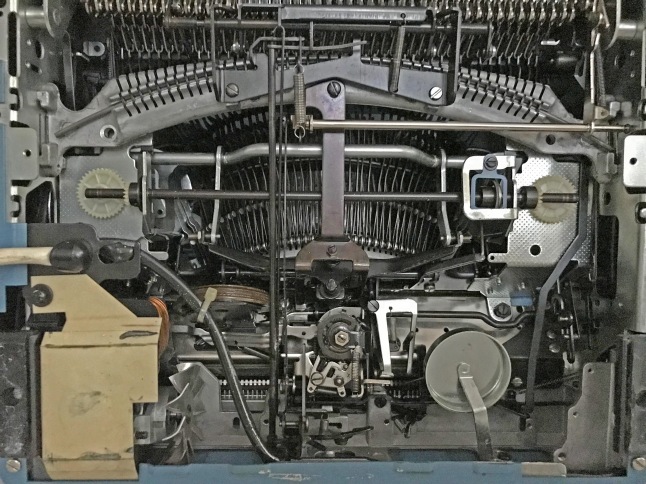 In the repair manual, I read through the section on the escapement and pondered these sentences.

Well, Spring H was not urging anything.  Spring H was doing NOTHING because the rachet dog (?) was glued solidly to the escapement rocker(?). 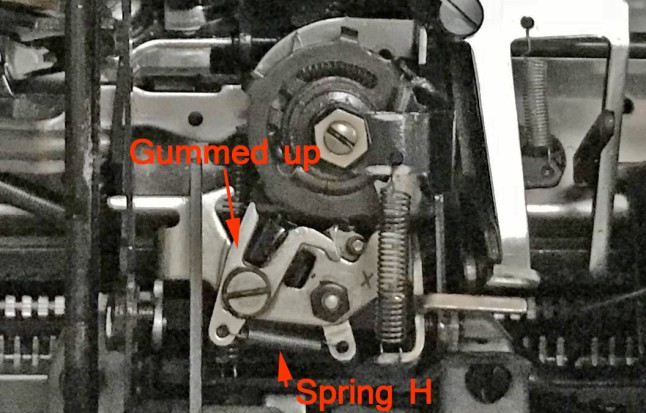 I took a screw driver and very carefully pushed on the rachet dog.  It was so gummy and stuck.  I doctored it with mineral spirits and pushed carefully until it moved freely and finally Spring H began to urge. The carriage caught.

Flipping it over, I plugged it in, turned it on, and began to type. Yes, I know what you are thinking: I rule. 10 Points for Gryffindor.

The moral of this story: sometimes you have to figure out how something works so that you clean in an effective way.

What a nice little typewriter!  I need to finish cleaning the shell and the type slugs.  The carriage return lever is bent down and just lightly scrapes the top of the ribbon cover.  I found the typewriter upside down in its case at the thrift store, so I can see how the lever could get mashed down.  I will need to carefully bend the return lever up a bit before it starts getting scratches on the ribbon cover.

It’s a sweet little thing and types just beautifully.  It’s not very noisy at all.  I am sure that I will be able to find a good home for it. Now I am thinking about the one I left behind at the thrift store, the Electra 120:

14 thoughts on “The Electric Slide”