I ended up bringing home the Adler J3 and the Alpina SK24:

The Alpina’s gigantic prehistoric clamshell case is worth the price of admission.

I paid more than I usually do. I was feeling flush, so I brought home a couple typewriters.

The Alpina was just junky enough. It needs a good cleaning, and it then will look and type great. I have always wanted to play with an Alpina and an Adler and here’s my chance.

The Adler looks like it was never used.  It had the factory control sheet, cleaning packet with brushes and a user manual.

The carriage lock was on, and I wasn’t sure how to unlock it, so I checked the user manual:

Stern but kindly. Star Wars Extended Universe needs to introduce a Yoda-like character that talks like this. I assume this was translated word-for-word from the original German.  I am going to start talking like this to my kids.

I had problems removing the Adler from its bottom plate of the case.  I carefully read the directions: 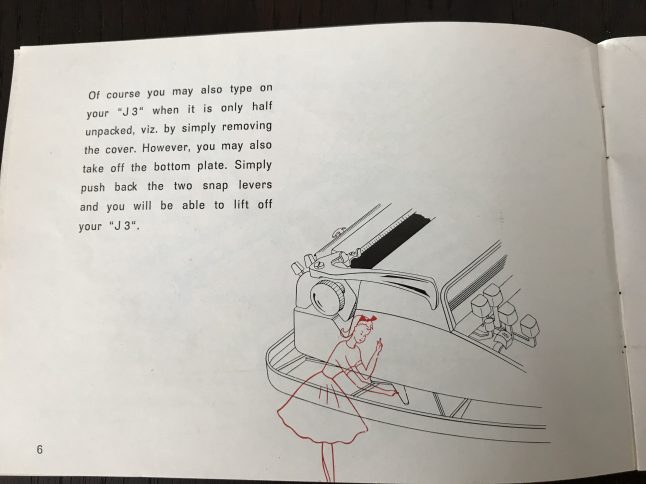 Fortunately, I found out that I am not the only person in the world who has had a problem like this with an Adler portable.  As usual, thetypewriterman had some insightful comments and very sensible advice.

I also vaguely remembered a Rev. Munk post about a Triumph Perfekt that wouldn’t come off its base and how he remedied the problem.

Both Oztypewriter and Writelephant have documented the entwined Triumph + Adler history.  Apparently the two companies joined their development and production programs in the 1950s.  The Triumph Gabriele 10 looks an awful lot like my Adler J3.

Anyhoo – the upshot is that on some of these Adler and Triumph portables, the rubber collars that hold the typewriter to the base compress over time, lose their shape, get hard, and prevent removal of the typewriter from the base.

I read through thetypewriterman’s instructions and Rev. Munk’s post and determined that I needed to remove the ribbon cover and with a long handled tool, pry off the  e-clips that hold the rubber collars in place.

I didn’t have any long handled screwdrivers in the house, so I emailed Good Neighbor Brian.  He came over with a bunch of tools.  Here is Brian petting my Adler as if it were a friendly cat:

I decided to work on the living room floor because why not.  I laid out an old white sheet to work on in case little typewriter pieces went flying.  I am glad I did because I had some washers that went on the loose.

Through some extreme finagling with a long-handled screw driver with a small thin head, I was able to pop the e-clips off each side and lift the typewriter free. The secret is getting in the little space between the clip and the spindle and popping from there. The misshapen rubber collars were stuck in the bottom of the typewriter so I popped them out:

Here are the latch components:

It’s a weird little setup.  The rubber collar is supposed to slide into the bottom holes of the typewriter.  When the latch is turned, it squishes the rubber down and secures the machine to the bottom plate.

Unfortunately after 50+ years of being compressed, the rubber collars have flattened, hardened, and won’t willingly leave the holes in the bottom of the typewriter.

In Rev. Munk’s fix, he found tubing of the correct diameter and cut new rubber collars to size. Since my rubber bushings were still fairly pliable and I didn’t have any rubber hose, I decided to sand them down so that they would slide  easily into the holes into the bottom of the typewriter. Good Neighbor Brian suggested the drill-mounted set-up below for sanding: 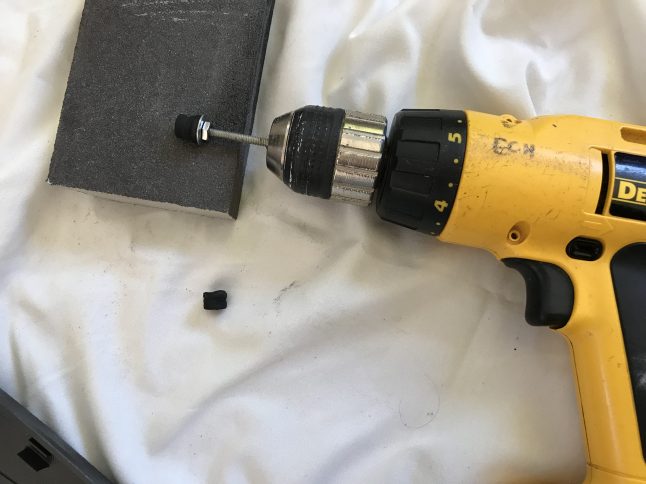 I mounted the rubber bushing on a long bolt in the drill and then ran the drill against a sanding block to sand off a little of the bushing.

I sanded just a little so that the bushings would slide snuggly through the holes.  I dabbbed a little olive oil on the rubber to make things slide and put the assembly back together. Silicone lubricant would have been best since it doesn’t degrade rubber, but all I had was olive oil. I’ll see if Brian has silicone grease.

Poifect! The typewriter attaches and de-attaches to the base flawlessly.

Here are some beauty shots.

It looks like the Adler typeface is Ro 82 Pica Imperial:

There are more pictures at Typewriter Database»

I am going to end it here with Barbara Mandrell playing the steel guitar and singing the sorrows of an Adler whose base just won’t let go:

I know this is Patti Page’s song, but I love Barbara and the multi-talented Mandrell sisters.

I saw this on Twitter the other day. Is Robert Caro in 2018 using a Smith-Corona Electra 120 to write his fifth LBJ volume?! Whatta guy!

Yet another photo of author Robert Caro wasting the entire day in front of Facebook. pic.twitter.com/cn3XMbkArB

My son saw my Chinook van with cow catcher in my last post:

and raised me a three-axle endtimes van (also seen in the neighborhood):