A recent family vacation meant that I was parted from my typewriters for two weeks. I missed them a lot and thought about them every day.

I happily dove back into it upon my return.  I alternate working on the L.C. Smith 8 and the Century 10.  I’ll get stuck on one machine and move over to the other and switch back and forth.

I initially cleaned the Century 10 with a damp rag to get the dust off, and it immediately looked much better.  It is such a petite little beast – a cute 17 lb package.   Although it feels like it has a cast iron frame, it may actually be made of pressed steel like its cousin the Remington Junior.

The old grease formed a protective skin over the entire machine, shielding it from rust – a happy situation.  In my limited experience, I’ve found solidified grease and heavy grime are much easier to deal with than rust and corrosion.

When the typewriter arrived, I noticed the shift key was sunken and nonfunctional.  I followed the connection up and found a loose lever but I couldn’t figure out what it was supposed to attach to.  I went to Typewriter Database and studied the Century 10 there and noted that the connector should be positioned vertically straight up and down. With this information, I found the spot to re-attach and all was well – the shift key works now. I love TWDB for the wealth of information in its images.

Shifting is old-timey high tech: a three bank keyboard with segment shift. The basket shifts down for uppercase letters and up for figures. It actually feels very light and snappy when typing and I can maintain a good pace. I can type a lot faster on the Century 10 than on my Oliver (I know that’s not saying much).

I removed the old dried ribbon from the weirdly tilted ribbon spools – and then noticed the spools weren’t rotating properly. The ribbon feed direction is controlled by a switch on the left base of the machine.  Once switched, the ribbon spool would rotate a few turns and then the ribbon driving gear would work its way out of the ribbon spool shaft pinion and all would stop.

There isn’t a whole lot of documentation on Old Weirdy. As a not-very-popular and briefly manufactured machine (1919-1924), it came and went and took its user, parts and repair manuals with it.  Its closest cousin, the Remington Junior, has a rear-mounted ribbon spool system set up. I used a Remington Standard Model 12 diagram from the D. E. Fox Typewriter Repair Manual, 1950, TWDB Documents Library for reference as its ribbon feed is quite similar to the Century 10’s.

I had problems just getting the spools off the machine.  I removed the top and front plates to get a better look.

You can see the LC Smith 8 lurking below the workbench, waiting its turn.

There is a metal piece in the center of the spool shaft called a Snap Catch that needs to be tilted to the side of the shaft to remove the ribbon spools.

left side drop weight is firmly held in place.

Figure II in the diagram above shows how the ribbon reverse is triggered once the ribbon fills the left spool and runs out on the right causing the weight to drop.

I found was that if I manually held the floppy weight on the right, the ribbon spools rotate properly. I put a temporary bread tie to hold the floppy weight for testing and found that the ribbon feed works great. I *think* I understand this system now. Once a ribbon is on the machine, it will hold the drop weight against the core of the spool and allow for proper feed.

I am glad that I found the Remington 12 diagram in D.E. Fox. I love TWDB for the wealth of information in its documents archive. 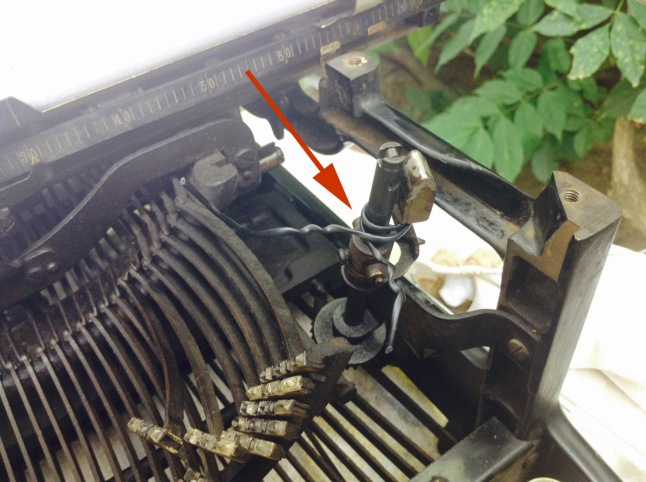 Simulating a full spool with a bread tie.

*I am starting to get the uncomfortable feeling that perhaps my understanding of what is “right” and what is “left” is mistaken. My left and right spools may be reversed as the ribbon feed is still at times a little balky. I may be confused by whether I should be thinking in terms of my right and left side or the machine’s right and left side.

The letter “I” had a bent typebar connector that caused it to collide with its neighbor.  I can’t imagine how that would have happened except maybe a spear in the guts – but there it is. 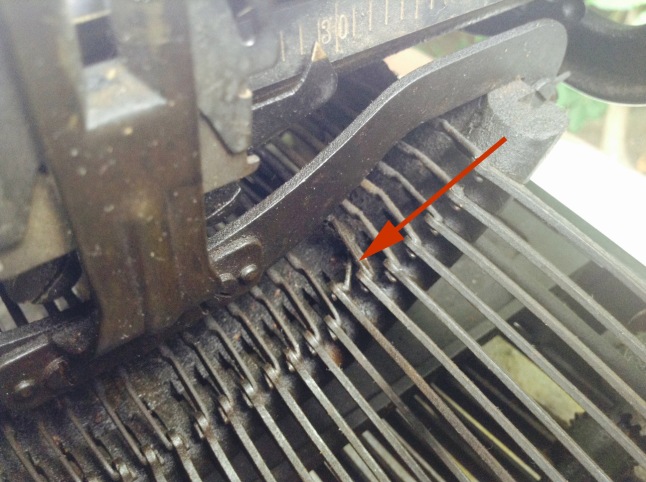 I gently tapped from the right side with a thin pick to get the connector back into position – my smallest punch was too large for the small space. The connector popped back into position after a few gentle taps. It may have been an unorthodox way to approach the situation, but it straightened out nicely and the letter “I” and its neighbor key are now working.

Now that the Century 10 is fairly clean and I have given her a light coating of Renaissance Wax, I took some photos:

I regret that this Century 10 is missing the paper table with the large “Century” decal.  I double checked with the eBay seller who said that the typewriter was part of building clean-out in an old part of St. Louis, MO and it did not have a paper table when they got it.

Google image searches for the American Writing Machine Co. Century 10 typewriter pull up a handful of results.  What’s very curious is that one of those few hits is of a typewriter in Spain also missing its paper table. The Powerhouse Museum’s Remington Junior on Robert Messenger’s blog is also missing its paper table.  Maybe these three typewriters can start a support group: Typewriters without Tables. Is there something about the way their paper tables were secured that made them so apt to go missing?

And here are a few seconds of me typing away happily on Old Weirdy:

13 thoughts on “The Sorta-Portable Century 10 Typewriter”