I have been working on the Royal FP, carefully cleaning and testing for skipping.  The typewriter still skips when keys are pressed rather than jabbed. The skipping only occurs when I use a Pressing Massage typing technique – which isn’t considered great form but is fairly common in “inexperienced operators” who aren’t familiar with manual typewriters. There is no skipping at all with the textbook staccato jab.

I decided to adjust the escapement trip just for funzies to see if that would affect the skipping situation.  I needed to identify the escapement trip adjustment screw, and Richard Polt recommended that I take a look at the 1945 Ames Service Manual and the 1968 Ames Service Manual which are both archived at the Classic Typewriter Page in the typewriter manuals section. They both had the information that I needed.

Here’s the important diagram that identifies the trip adjustment screw from the 1945 Ames Service manual:

I mentally rotated this diagram in my head and determined that this screw that I spotted through the springs in the bottom of the typewriter was the trip adjuster (I had turned the typewriter on its back to see this):

I may try adjusting the trip on individual keys since the skipping seems only to occur with keys in the center of the keyboard (eg “h”, “g”). I don’t know.  I don’t want to throw a perfectly wonderful typewriter out of adjustment as a concession to bad technique.

The Davis Brothers produced a very funny video on typing technique. The gist: many output problems like skipping, piling, and shadowing are related to operator error – plain old poor technique. Check out their video – it’s entertaining and informative.  It features a particularly beautiful red Smith-Corona Galaxie.

I have to concentrate to simulate the strange, lingering touch required to reproduce the skipping in the FP. I am going to follow the Davis Brothers’ lead, chalk it up to poor technique, and try to educate users in good typing technique. As the 1945 Ames Service Manual puts it:

As you may recall, I am considering a re-paint of the ribbon cover, front plate and paper table of the FP. Here are the results of the poll that asked “What Color Should I Paint the FP?”:

I ordered some coral pink powdercoat paint (RAL 3017). I am still debating about whether I should paint the typewriter. At least one person polled felt that I shouldn’t do anything to it. That gives me pause.

And Now for Something Completely Different

Moe has a lot of friends with terrific typewriters.  Her friend Alan had an Underwood Standard Four Bank portable that he wanted me to look at.  It needed a new ribbon and a cleaning for sure. 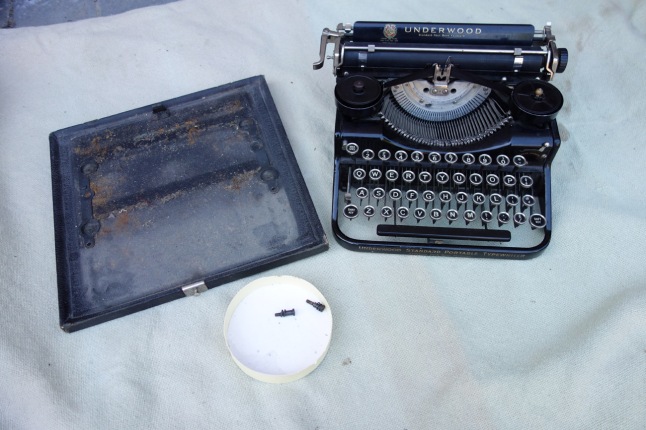 I took the typewriter off the base.  Instead of latches, I removed two medium sized screws with associated springs to free the machine from the base.  I am glad I did.  It was filthy under there.

The typewriter was missing one of its knurled thumb nuts that hold the ribbon spools on.  Some time in the past, someone had substituted a round nut for the missing thumb nut.  It works great, but it isn’t a very close match to the original thumb nut.

This got me thinking about spool thumb nuts that go missing – lots of different sites online sell knurled thumb nuts in different sizes for a variety of applications.  I have seen typewriter-specific thumb nuts before too.

This machine was otherwise in very good cosmetic shape with glossy paint and lovely decals. Obviously it had been well-protected in its case over the years.  However, it did smell very musty.  I’ve found that much of the odor from stinky typewriters comes from their old stinky ribbons. So: out with the old and in with the new.

I love the look of a red and black ribbon on a typewriter, and I have a stash of brand new ones that I ordered from Oregon.  I always test a typewriter with a little scrap of red/black ribbon to make sure that the ribbon carrier is rising and falling properly so that text is all black or all red on typing. 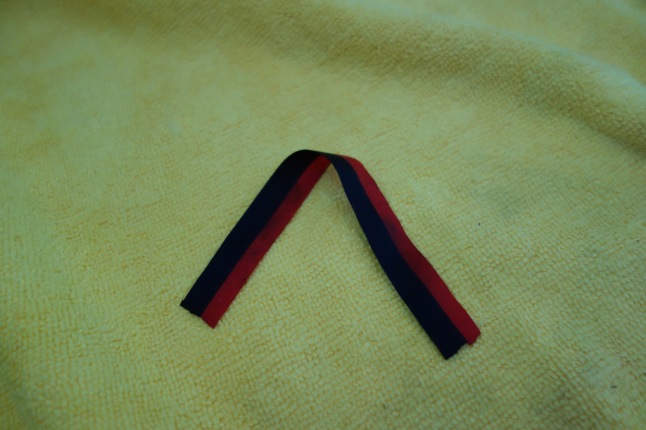 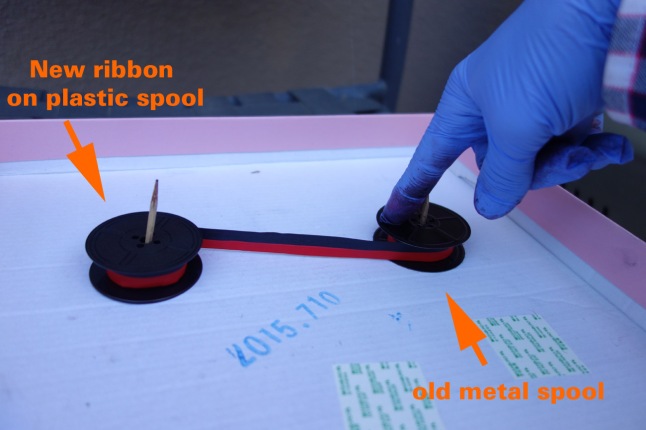 With my finger, I quickly spin the new ribbon onto the old spool.

Once I confirmed that the ribbon carrier was rising and falling properly, I needed to re-spool.  This machine had metal spools so I re-spooled the new ribbon onto the old spool. I know that I could do this on the typewriter in the spools holders, but I don’t like to get the machine dirty and smudgy with ink. And sometimes the plastic spools don’t fit on the typewriter spindle.  I usually set up a spooling set-up with bamboo skewers so that I can quickly move ribbon onto the old metal spool.

The typewriter was pretty dusty and a bit gummy, but it was typing great after I cleaned the segment.  I cleaned the slugs. Elite typeface is the worst to clean.  It never looks as crisp as I want:

As I was putting the typewriter through its paces, the “8” key would hang up and its typebar would not return to resting. I turned the typewriter on its back and peered around. I struck the key again and the typebar returned to resting. And then it happened again and again to different letters. I’d continue testing and then an adjacent letter such “6” would get stuck in the “up” position:

My hunch was that the linkages for the typebars were somehow colliding underneath the machine.  I focused my investigation on the linkages near the segment and watched as first one and then another typebar would get stuck in an “up” position. Perhaps there was a bent linkage? Sometimes several would get stuck up together, but I found that just turning the typewriter onto its back to look around and sometimes hitting the shift key helped free the typebars to return to resting position.

After it happened for the 100th time, I propped the machine onto its back and got some better light. Lo and behold: the ghost of thumb nuts past. 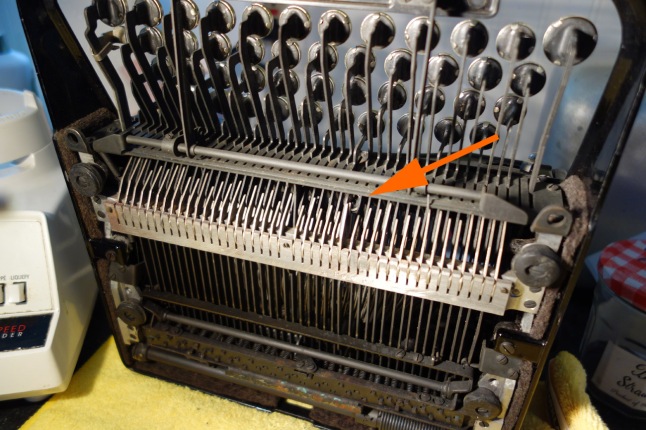 Blender says: I told you that you weren’t looking in the right spot.

I worked the nut free from where it was jammed in the key lever linkages using a dental pick and retrieved it from between the typebars using a pair of needle nose pliers: 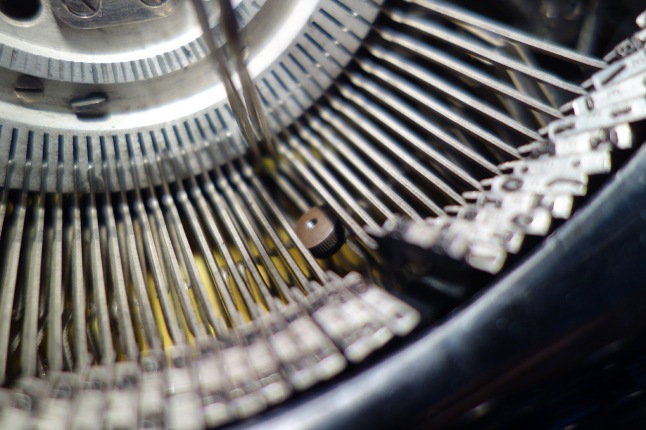 Oh joy!  The matching thumb nut! And no more crazy typebar jamming! I can’t tell you how thrilled I was to solve two problems at once.

There was a dangling feed ratchet thing hanging from the right spool. It had a hole in it that said, “Hey, I need a spring here!” 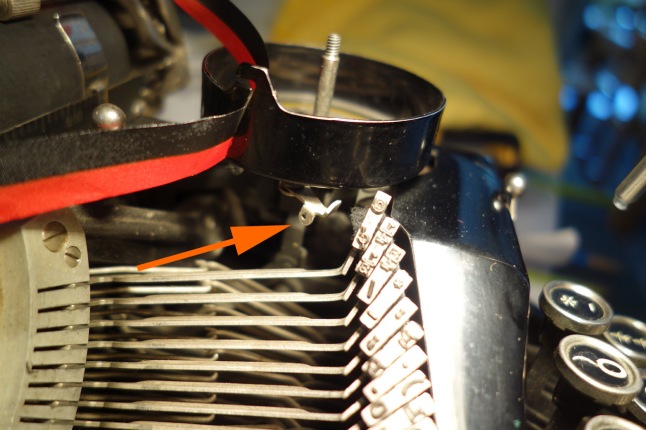 I found the teeny disconnected spring way, way under the spool cup and re-attached it – and yay, ribbon feed in that direction was functional once again.

Here’s something fun about this typewriter: it’s carriage shift, and the ribbon cups move up and down with shifting:

Wacky, huh? Like its eyes are bugging out on shift.

I am having problems nailing down a date for this beautiful 192X Underwood Standard Four Bank Keyboard portable. The serial number is 4B84031.  It’s probably an early-ish one since it has only one platen knob, a metal shift lock key and an unusual carriage return lever (Richard Polt has a similar Underwood Four Bank that he dates to 1926) 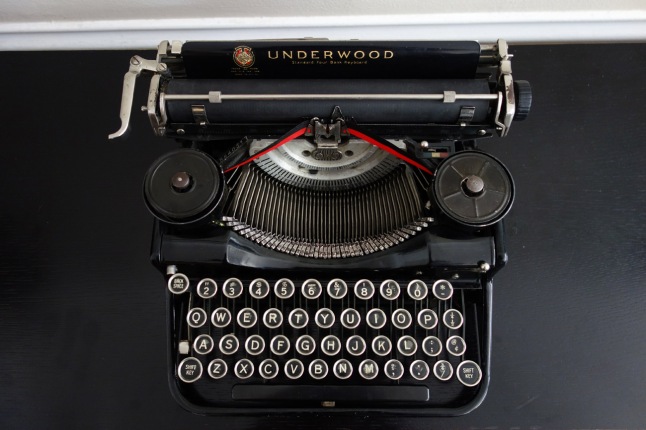 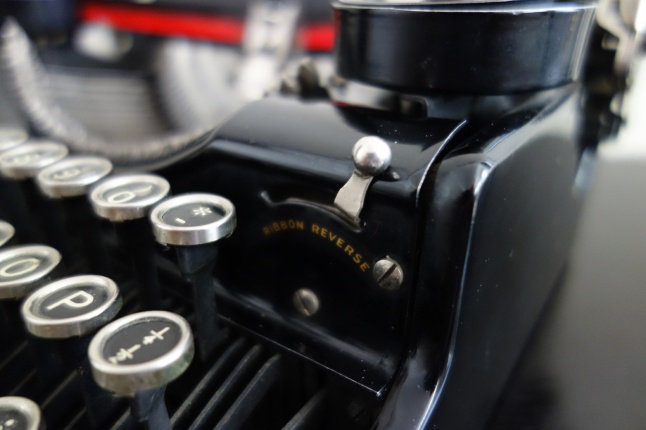 Lessons learned in this episode: