It is Labor Day holiday here in the US, and I labored happily over my typewriters.  I tinkered with the Fox No. 24, got stuck and decided to wash my collection of typewriter rags while I thought through the problem. 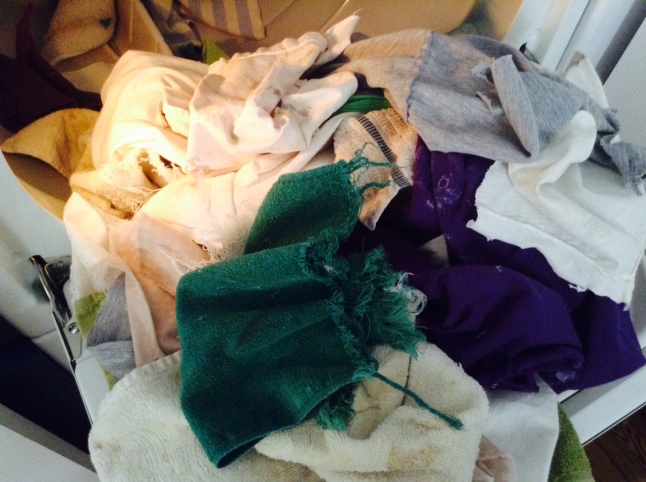 Clean and ready for typewriter duty

I then read Richard Polt’s very interesting post on his Adler Universal that shows the ease with which the carriage is removed – and that jogged my memory. I needed to take my Lexikon 80 apart and fix the drawband.

The drawband on my Olivetti Lexikon 80 had slipped off recently while I was moving it.  I had replaced the drawband with fishing line not too long ago after it broke, and I worried that the slippery fishing line might slide off the mainspring drum at some point since the drum had no lip to hold the draw string on. Well, it did just that when I was moving it inside after the block party. 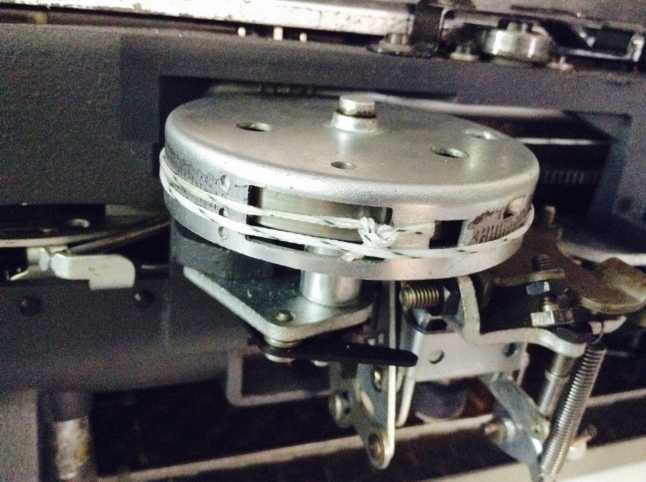 I decided to try my luck with shoelace since it would be a bit closer to the original draw strap material.  I bought some flat black shoelaces at the grocery – $1.79.

I cut a piece of shoelace about 17 inches long – which is about the length of the original draw band:

I had held onto the Lexikon 80’s two original drawstrap hooks for sentimental reasons. I found them and pried their little jaws open – these secured the old drawstrap.

I made sure that the sharp triangular teeth were poking up – these grab the draw band. I inserted my shoelace and tapped the hooked retainer closed. I repeated this on the other end of my shoelace draw band.

I then removed the cover and carriage from the Lexikon 80 – see Rob Bowker’s great tutorial – and pulled off the old detached draw string. Using a bamboo skewer (I will always be indebted to Robert Messenger for his documentation and use of the bamboo skewer in drawband replacement) and fed the shoelace through to the mainspring.

Here is my shoelace hooked on the right side of the carriage: 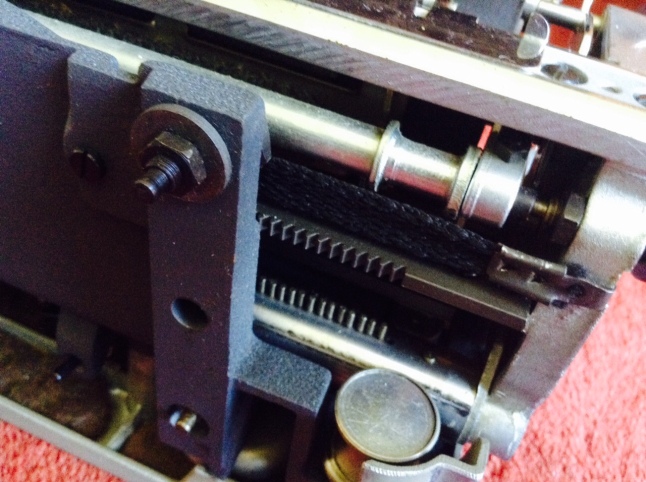 Super classy!  We’ll see if it holds up and doesn’t slip off.

While I was replacing the drawband, I reflected on the typewriter drawbands that I have known:

I like junkier typewriters, so many of my typewriters have had drawband problems.

The Lexikon 80 is happy to be functional again – the new shoelace drawband is very handsome. I had hoped to make more progress on my Fox 24, but overall it was a pleasant holiday spent tinkering with typewriters.

The 1952 Olivetti Lexikon 80 that I brought home from Goodwill looked pretty bad on arrival. It was covered in grime and dings and scrapes and sticky tape residue. To me this is evidence of a very hard worker who really used his/her typewriter – and who took lunch breaks at the desk (bologna sandwich, a cup of black coffee, and a cigarette) .

Fortunately I had come across Typewriter Heaven’s post on Lexikology which details how to remove the cover and carriage from the typewriter so that I could pursue a good cleaning.

I followed the steps and pretty soon I had a neked typewriter. 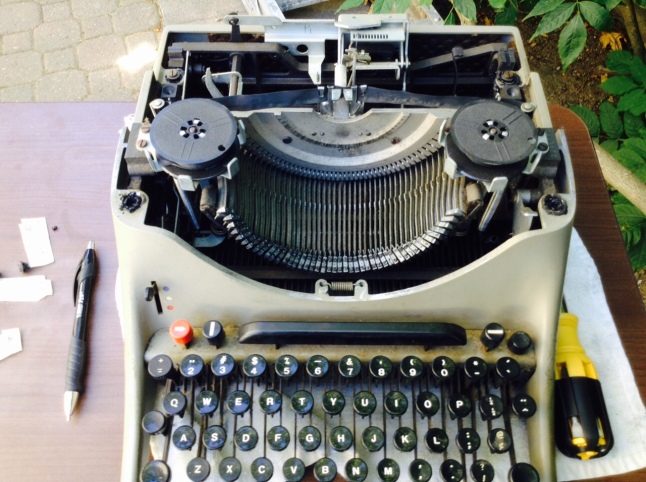 There was a lot of debris behind the segment – including a shard of white pottery.

The stripped-down machine innards are pleasantly alien. I have been submerged in pre-war cast iron for the past few weeks and the Lexikon 80 is a blast of fresh modern air. I would assume that for 1952, it was very cutting edge. 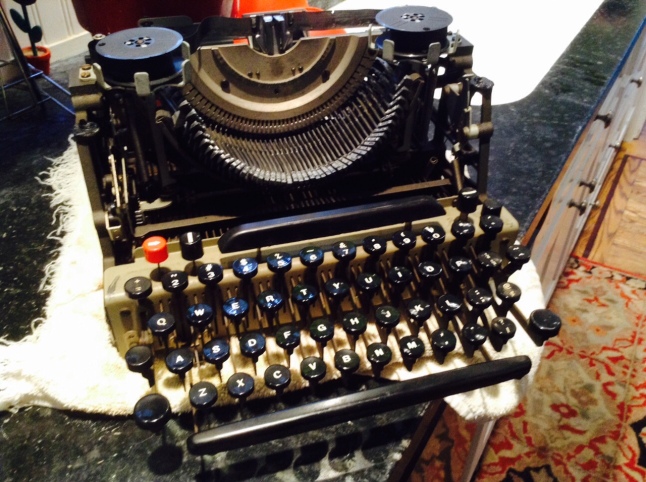 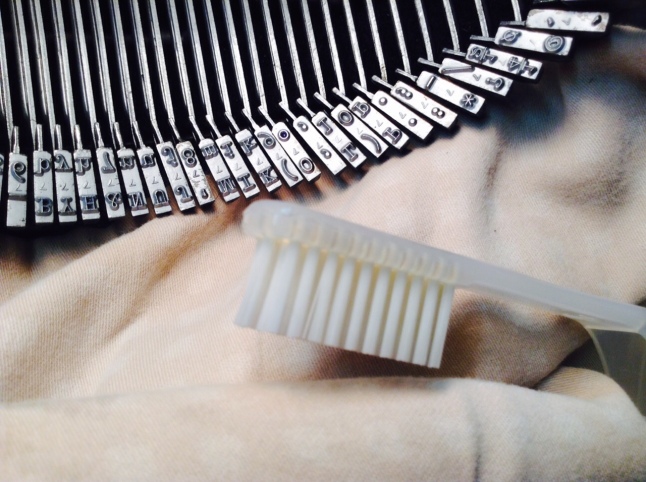 I scrubbed the type slugs and type bars with denatured alcohol and the grease dissolved beautifully. I was careful to drape plastic and painted areas.

I cleaned the segment with denatured alcohol first and because the keys still felt sticky, mineral spirits afterwards. The keys on the right were particularly sticky. Did someone spill a Slurpee® into the segment?

The margin release key was sunken – I followed the connector down and found that the lever had migrated out of its slot – popped it back in and all was well.

I don’t understand the tab mechanism very well. While cleaning the keyboard, I pressed on the tab key and it got stuck in a depressed state. I found that a small metal piece attached to the tabbing mechanism in back was bent to the side. It didn’t look right, so I straightened it out and it seemed to be work better.  However, the tab key still felt gummy and the tabs weren’t working reliably. 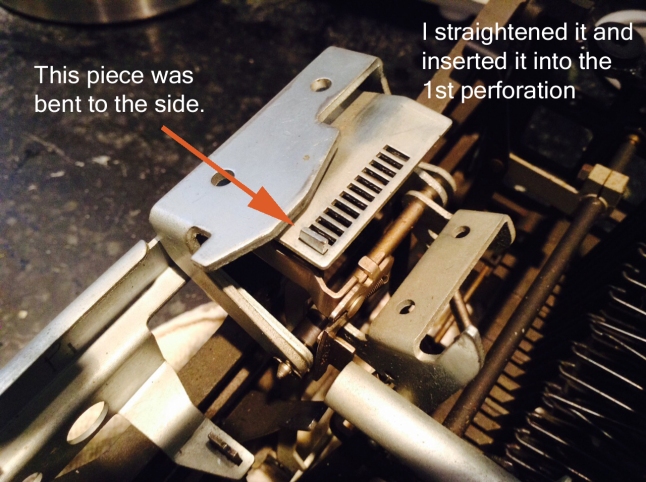 “Not working reliably” is an understatement. After I put the machine back together, I tested setting and using tabs. It seemed to be working gummily but OK.  Then I made the mistake of clearing all the tabs and hitting the tab key. Bad idea. the carriage whirled to the end of the line and upon return, did it again and again. I ended up manually lifting up on the gummy tab key and that seemed to correct the problem. I immediately set a tab so it wouldn’t happen again.

After the fact, I stumbled across Rob Bowker’s post on Graphika and Lexikon tabulator eccentricities.  Good to hear that I’m not the only person to experience the strange tab behavior. My tab key felt stiff and gummy, so maybe gunk was causing a problem.

So I took the cover and carriage off again and examined all the moving parts of the tab mechanism. I applied PB B’laster Penetrating Catalyst to all the areas below and worked the tab mechanism with my hands. The gumminess receded and the tab key began to move freely.

No set tabs – no problema! Works great now that it’s a bit cleaner and lubricated.

I applied PB B’laster to these areas. I had to hold a flat plate down with my finger so that I could freely work the tab key.

And more cleaning: I cleaned the cover with a little Soft Scrub – it’s a mild abrasive.  It did a great job on the scaly grime, but I found that it was the Scrubbing Bubbles that really tore through the discolored dinge-colored grime.  The hard enameled paint withstood the Soft Scrub and Scrubbing Bubbles treatment. I was cautious because some typewriters have very delicate paint. I used Goo Gone for thick areas of rubber and tape residue. Areas of the cover that I thought were scraped and damaged were actually just scaly with grime. After cleaning, the Lexikon looked a little vulnerable and naked without her covering of scaly grunge, so I gave the cover a good protective coating with Renaissance Wax. I love the pretty greenish-taupe that was hiding under the dirt.

The originally washers were sticky globs of melted goo – a horrible mess.  I scraped them off and cleaned the areas with Goo Gone and denatured alcohol.

I found replacement rubber washers at Home Depot that were sort of hard to the touch, but they did the job.

I was able to reattach the carriage without much drama. A good wiggle and it was back on. I inserted a new ribbon and fired up the machine.

I wanted to give the keys some exercise and began a letter to a fellow typospherian.  I got halfway through the first page when I heard a snap and a zing and found the draw band snapped. Good Grief, Charlie Brown!

I sighed, pulled out my 80lb fishing line (suitable for deep sea ocean fishing and typewriter repair) and got to work.  I decided to salvage the end hook that attaches to the carriage frame. 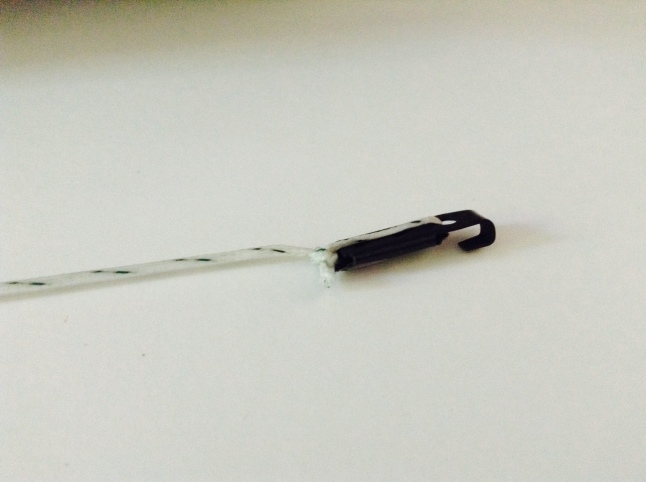 Bamboo skewer to feed the line through to the mainspring

I wound the mainspring 3.5 rotations and tied the fishing line to the mainspring. I did it by myself, but it would have been easier with a second pair of hands. The typewriter is happily typing again.

This Olivetti Lexikon 80 cleaned up so nicely. I swear I didn’t put Vaseline on the lens. 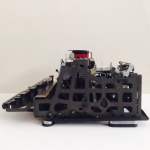 This typewriter has some special keys I haven’t had the pleasure to possess before: accents – acute and grave – umlaut, and circumflex.

Here are some things that I couldn’t type until now:

Addendum: a family member requested that I include this sample of the creative use of the umlaut:

One final note: be sure to check out Vintage Technology Obsessions’ post on Olivetti Lexikon 80 production lines. There are some fascinating images there – I love the Lexikon 80s rolling along on a conveyor belt. I went to the Italian site referenced in the post and found this great image of Enrico Fermi inspecting the innards of a Lexikon 80. I may hang it above my Lexikon 80.

Totally Your Type had a recent post entitled “Be Patient. Look Everywhere” that offered words of encouragement to typewriter hunters. The gist: sometimes, when and where you least expect them, typewriters happen. You just need to be patient and persistent.

I was at the auto parts store nearby picking up some Liquid Wrench and open end wrenches for my LC Smith 8 vertical type adjustment project and decided to stop in at Goodwill just in case. I was under no illusions that I would find a single typewriter, but there amidst the toasters and Igloo coolers was an Olivetti Lexikon 80.

This Olivetti Lexikon 80 fits all my qualifications for a great typewriter:

Plus, it looks pretty easy to strip down to the machine guts.  I got the Lexikon 80 home, researched it a bit and found Rob Bowker’s inspirational Lexikon 80 dismantling. Wowie. This typewriter will be an awful lot of fun to clean. 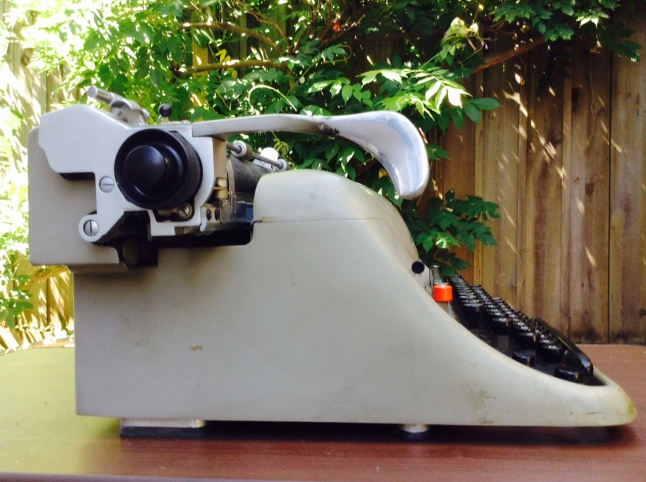 And: it’s got the beautiful sweeping lines of Moby-Dick. Thank you, Marcello Nizzoli.  And like a sperm whale, the Lexikon 80 weighs somewhere between 40-50 tons.

This Olivetti has a thick layer of tobacco grime – residue from what could be a “hoagie + stogie” typing habit. But hey, no judgments here! Since I got my L.C. Smith No. 8, I now understand the importance of a good cigar while typing.