Some time ago I pulled out my Rheinmetall to type up some stuff, and I said to myself,  “How sweet it is!” The typing was perfect. I love the way this thing rolls – serious surfin’ swagger. 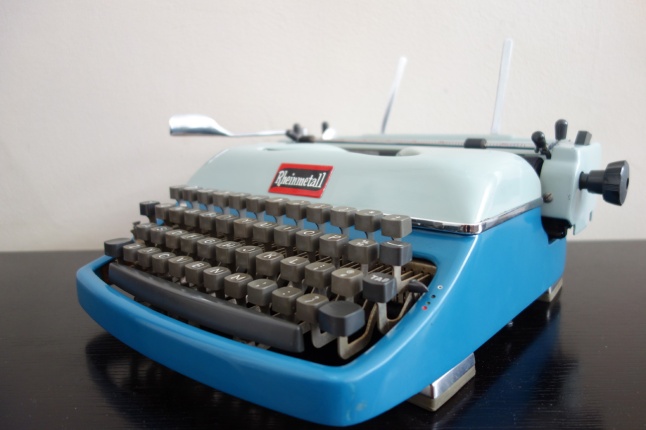 Toss me the keys, Baby, and let’s blow this popsicle stand.

The typing was perfect until the ribbon stopped advancing mid-sentence. What!!

I took the ribbon cover off and peered around.  I tested typing and it was fine. 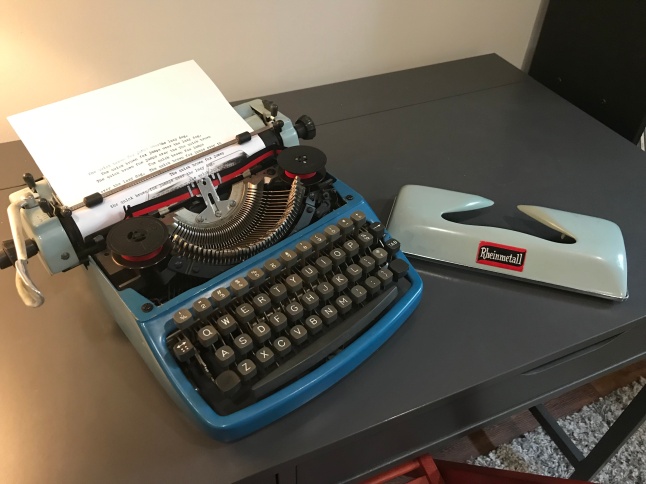 I removed the ribbon cover and completed whatever it was I was typing and then took a closer look under the hood.  I was missing a rubber washer on one side.  The ribbon feed mechanism was binding intermittently in one direction.  Perhaps the lid sat too low. 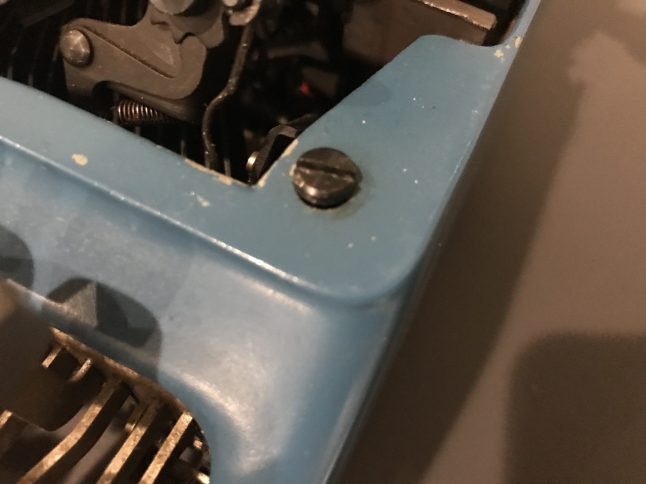 There are so many topless typewriters out there.  I wonder how many were victims of ribbon feed problems that resolved with cover removal.  The lost ribbon covers now belong to the ages.

Ribbon feed problems could be due to a number of issues:

from The Manual Typewriter Repair Bible

The ribbon cover that binds on the spooling mechanism (#4)—that is a thing.

Here is a BBC article from 2012 entitled “Five reasons to still use a typewriter” with images of not one but two Letteras without ribbon covers.  Did the BBC have problems finding photos of intact typewriters in their stock image archives?

Which brings me to the Consul 232 without a ribbon cover that I brought home from Herman’s.

It was a wee bit rusty. The roof fell in and the rain came down:

The Consul 232 User Manual (found at Richard Polt’s typewriter manual archive) has an image of of a woman with an umbrella—something this Consul could have used at some point.

The typewriter was made in Czechoslovakia:

According to Typewriter Database, you interpret a Consul serial number this way:

The first digit of serial number indicates the year of production (4 means 1964), followed by model number (2 or 3 digits), followed by the machine’s s/n of 6 digits

It has interesting mechanics – at least to me, someone who sees a lot of Smith-Coronas and Royals and not too many Czech typewriters. Czech out these key lever pivot rods.   They were a little crunchy, but loosened up with PB B’laster.

I am currently contemplating swapping out a broken key lever on a Royal Safari, and it’s going to be a helluva job.  If the Safari were constructed like this Consul, I’d be happier.

Here are the Consul’s weird guts.  This is before cleaning—and it still typed just fine.

The Consul isn’t rattly and clattery but surprisingly solid despite its very light weight. This cleaned up nicely.

I decided to make a paper mache ribbon cover.  It’s a cute little thing, and it didn’t seem right to leave it without a cover.

I first cut out a rough template from paper that I transferred to foam board.   I made it large and cut it down, tested the size , cut it more, and then used hot glue gun to hold it all together.  I tested typing on it to make sure all the typebars sailed through to the platen. The foam board was a light but structurally strong base – good for my paper mache.

I made a flour and water paper mache mixture from 1 part flour to 5 parts water, cooked it on the stove to boiling for a few minutes and then let it cool. It was nice and smooth.

While that cooled, I threw in a new ribbon and typed out quotes on the Consul on imperfection, etc.

Yeah, whatever, Lady. I don’t know about that.

I am currently constructing my own paper mache wand with which to hit my head.

I cut small pieces of the typed quotes and dipped them in my flour/water mixture and paper mached the heck out of my foam board ribbon cover. I then painted it with dilute coffee so that the white paper was more of a cream to match the platen knobs and space bar. 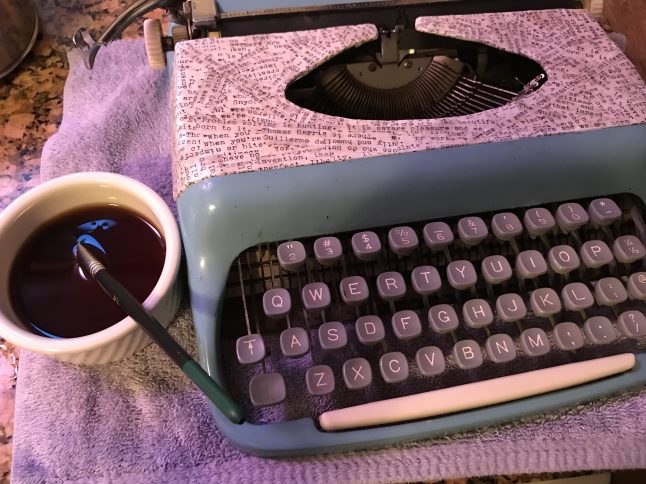 I don’t know – the art here seems a little corny and obvious.  With the quotes all crammed together, they sound Hallmark-y without space to stand alone and breathe.  I decided to type out details of this Consul typewriter, and my daughter suggested including the URL of my blog. She knows I like a little self-promotion.

I futzed and futzed with the cover until I realized that it was never going to be perfect —but wasn’t that the point of this exercise? Have I learned nothing?

I christened this Consul the “makeSHIFT” —ha!

This scrappy patchwork paper mache ribbon cover makes me think of Dolly Parton’s “Coat of Many Colors”.  It’s on my playlist called “70s Weepies”.   I always get so choked up when I hear Dolly’s sweet, chipper little voice recount the lessons of making shift during her hardscrabble childhood in Tennessee.

I wonder if the other little Consuls at Typewriter Database will make fun of makeSHIFT and her scrappy little ribbon cover. No, they’re nice kids.