I have been a bit under the weather since the holidays – some kind of feverish fluey-kablooey, but I stirred myself when a comment came in from my last blog post.  The commenter told me that someone had put Baby Blue on eBay. Not only that, Baby Blue sold!

As soon as I was able to pull myself out of bed, I headed over to Moe’s shop to get the whole story. After her clean up, Moe had sold Baby Blue almost immediately for a good price to a friendly fellow dealer, and he had promptly listed and sold the typewriter on eBay. Baby Blue is pretty sweet, and I am glad that my efforts fed the chain. I hope her new owner will love and cherish Baby Blue in the way she deserves.

Sadly, the golden Olympia Monica was gone by the time I got back to Moe’s shop.  I had wanted to take detailed photos of her for the Typewriter Database.  I fully expected to find the Monica curled up on Moe’s couch in a zipped jumpsuit and smoking a Virginia Slims, but no. A regular shopper at Moe’s had scooped her up almost immediately. This buyer is apparently interested in All Things Orange, and he had found the Monica entrancing.  Moe and I both agreed that the Monica was not orange and not yellow but a color Moe dubbed “Marigold”.

Formidable in her golden glamour, the Monica should be installed in a beach house in Malibu.

While I was at Moe’s shop I asked her if I could clean up her Royal KMM that has been wasting away in the shop since before Thanksgiving. I love fostering typewriters because I get to poke around in something new without threat of excessive typewriter accumulation at home.

The KMM is very dirty with a sluggish carriage and dry ribbon.

When typing, there is considerable letter piling because of the sluggish carriage.

But there is so much potential under all the gummy dust. It’s just like David McCullough’s typewriter! I cherish the greenish-blue keys.

I admit that I was nervous about bringing the Royal KMM home because I have a Remington KMC in the house. Who can forget Richard Polt’s KMC vs KMM shoot-out of 2013? By bringing the KMM home, there was marked potential for a catfight.

I slipped the Royal KMM in the door as quietly as possible, but the Remington KMC saw us together. Oh well, here we go. 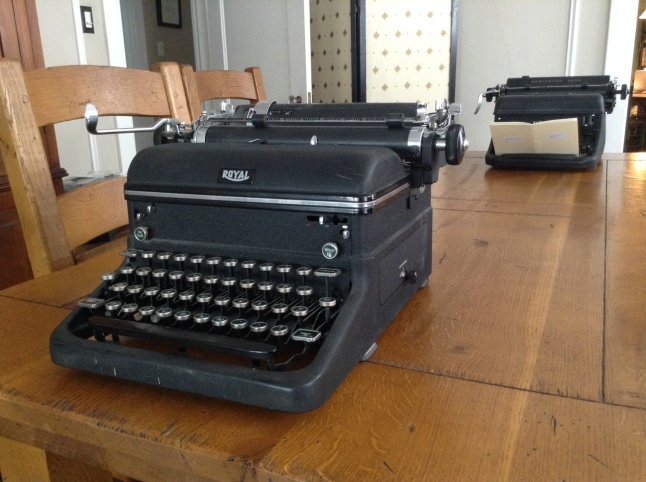 Suspicious minds: the Remington KMC pretends to nonchalantly leaf through a zine while she checks out the competition

First off, I weighed the KMM for Magic Margin’s KMM weight survey.

Woofie! So heavy.  The Remington KMC is a relatively petite 32.5 lbs.

This KMM is very dusty and feels pretty gummy.  My plan is to blow out the insides, clean up the internal mechanics with mineral spirits, repeat the blowout, lubricate the rails, scrub the outside with Scrubbing Bubbles, and throw a new ribbon in her before sending her back to Moe’s shop. With a little pampering, the KMM is going to be swell. 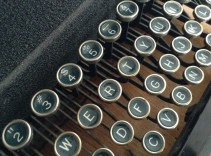 15 thoughts on “Another Foster Royal”