I returned to Virginia with an hankering for a broken typewriter to clean and fix. Cleaning my sisters’ Quiet-Riter and Royal Administrator had whetted my appetite.  I have a type: the junkier and more dysfunctional the typewriter, the better.  They provide me with hours of fun (and gentle, comic frustration). Hey, there’s a meme for my taste in typewriters – albeit one that played out in 2017: 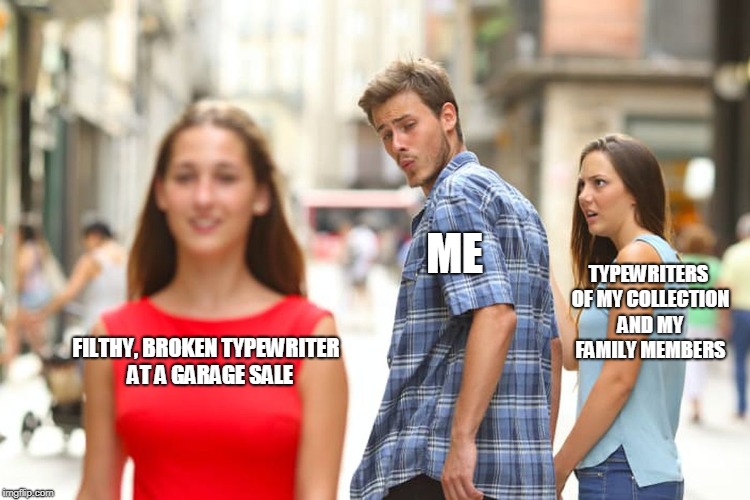 I started cruising Craigslist and local eBay for a likely candidate and spotted this:

And what about that great typeface (which I think is Olivetti Elite Victoria)?

This typeface reminds me of Oliver Printype

This Lettera 22 is in very clean typing condition with the original case and manual; however, it has an intermittent lowercase alignment after shifting issue that I will address in a future post:

Anyhoo, I figured that I could use this working Lettera 22 to aid in the recovery of the Craigslist Lettera.

I also carefully read through Ted Munk’s post Off the workbench: 1959 Olivetti Lettera 22 and all its comments to familiarize myself with what might be wrong with the Lettera that I was picking up.

As I drove over to pick up the typewriter from the Craigslist seller, I heard a favorite piece of chocolate cake rock on the radio and took that as a good omen:

It was a good omen.  I found the Craigslist seller delightful.  An art teacher, J. has recently started collecting typewriters and she showed me around her collection which included an Underwood 5, a Royal FP, an Olympia SM3, and several others.  She journals in the morning on a Smith-Corona electric.

We wandered out to her car where the Lettera was located and were accosted by deer.

J. opened her car’s trunk and here’s what I found:

This Underwood Olivetti Lettera looks like it’s been camping for the past decade. The back is covered in what looks like bird poop.  It is said that it is good luck to be pooped on by a bird, but this just seems like willful disrespect by a bunch of a pigeons.

There was no case and the inside was rusty and there were clumps of oxidated something (or bird poop?) in the mechanics.  The carriage was not staying put.  It careened to the left and didn’t “catch” when using the carriage release or typing.

I told the seller that I would try to get it typing again and if nothing else it would become a good parts machine for other typospherians.

I brought it home and examined it on the back patio.  Its serial number is 768990, and it is made in Italy. Looks like a 1960 Underwood Olivetti Lettera 22.

I found that I could get the carriage to catch occasionally if I firmly pressed any key.

Hanging out (literally) on the patio

At my garage workbench, I took the bottom plate off (four screws where the feet are).  There are four screws attaching the top cover which I removed.  I was able to remove the cover by setting the margins all the way out and extending the carriage:

It was very rusty and crunchy in the guts:

I carefully blew out the chunks and dirt from the naked Lettera with my DataVac Duster and then began to doctor the stiff parts with mineral spirits. The typebars began to swing.

In the comments for his post Off the workbench: 1959 Olivetti Lettera 22, Ted Munk describes a fix for an errant carriage such as mine:

If you can get the bottom cover off of your L22 and turn it over, underneath the carriage directly in the rear center of the machine is a toothed gear and pawl which you can hit sparingly with a little spray LPS1 or PB Blaster (do not use WD-40 or 3-in-1 oil), which will free up that pawl and cause the carriage to work right again.

I applied PB B’laster, my favorite penetrating catalyst to this area under the machine and yippie – fixed that roaming carriage!

The tabs were sticking and gummy, so I cleaned the tab pins/rack and associated connectors and those started working smoothly. The type slugs were thick with dried ink, so I cleaned them up with a toothbrush and mineral spirits.  Some time in its past, this Lettera was used thoroughly.

I was very glad that the original spools and spool nuts were still with the machine. Looking good, Craigslist Lettera!

I put the top and bottom cover back on my Craigslist Lettera and stepped back to admire my work.  Let’s compare my two Lettera 22s:

The typing feel is remarkably similar – so pleasant for such little machines.  The real difference between the two machines is the noise.  There is a subtle loose clanking, a jangling sound that comes from the 1960 Craigslist Lettera while typing that is absent in the other. The 1950/1954 Lettera has a tight, controlled voice.  I spent about thirty minutes trying to find the source of the soft clanky jangle in the Craigslist Lettera. The platens are about the same in terms of hardness.  I tried to still different parts of the machine with my hands while I typed, but found no source.  I’ll have to take the covers off again and investigate further.

Because its current paint is bubbling and chipping off, the Craigslist Lettera is a candidate for sand blasting and powder coating. I just need to find a DIY space to do that.   I sandblasted and powder coated the Voss typewriter at TechShop.  Sadly, TechShop filed for bankruptcy this year and closed all locations.

A final note: our family’s three year old Microsoft Surface 3 tablet took a catastrophic fall recently and has become electronic waste for recycling. This led to reflections on the declining durability of mass produced writing machines.

Compare and contrast: my new junker Craigslist Lettera is older than I am and will likely be typing long after I am dead and gone. Despite being pooped upon by birds and rained upon and neglected, that thing woke up and types beautifully. Craigslist Lettera wins this round.