I have been experimenting with Vine typewriter videos. Vine is a short-form video sharing service similar to YouTube, but the videos are a maximum of six seconds long. It’s a great format for me since I tend to be long-winded and it compels me To. Cut. To. The. Chase.

I can’t tell you how much pleasure I get from typing on that rattly old thing.

A couple months ago, my Oliver arrived in a damaged box that had been sealed with a kiss from the eBay seller and not much else. The typebar towers were mashed so much so that the top 3-4 typebars couldn’t move – they were all tangled together and rubbing each other especially on the right. The pencil holder was crumpled down. 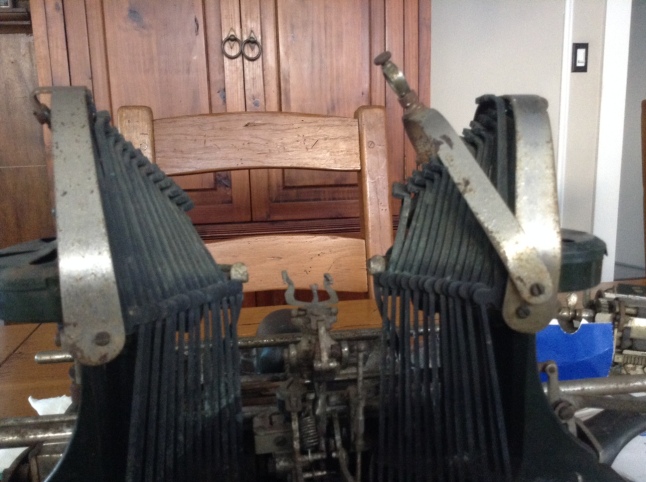 So I straightened things out. The typed text in the “before” shot shows the ransom note typed peculiarity of the bent typebars:

The “After” text is not quite straight, but I like the residual wackiness. It’s a 94 year old typewriter with its own personality, dammit.

They came out very clean – a lot of bare metal but better than rust:

I bent the tower guards with padded pliers and worked on the typebars themselves with my bare hands. The typebars are very soft and with very gentle force + trial and error, I was able to disentangle them and straighten out the text. I took it very slow and made small, incremental changes.  Though I live next door to the Metal Master Good Neighbor Brian, I would really kick myself if I broke any of these old typebars.

Lastly, here’s a bonus Vine video clip.  In six seconds or less, I remove the carriage from my Oliver No. 9:

10 thoughts on “Straightening Bent Typebars on the Oliver No. 9”