We formally put Summer to bed more than a month ago. Though it remained hotter than Hades for a good long time after, they closed the pools and everybody had to Get Serious.

I experienced a severe summertime hangover and really had problems Getting Serious.  The familiar rhythms of work and school have resumed, but I am stuck in summer. It may be that my Typewriters Across America Experience was too rushed and I haven’t had time to process everything I saw and felt.

I started doing some work for a new company and in the course of new employee orientation, something in the employee handbook jumped out and caught my eye:

This means the party is officially over.

I had a few days in California in August before I had to return to the east coast.  I played with my new 1956 Alpina, but ran out of time cleaning it up. It looks like a chunky 1950s robot.

Birth of the Superchunk 3000 by Botticelli

It was very dirty:

Even so, I put some paper in her and did a short typing comparison with the new Adler J3 and the Olympia SM3:

Both my son and I did comparison typing.  The Alpina (even in its grunky state) was a very close competitor to the almost brand new Adler.  The Olympia is wonderful (also almost brand new), but both of us didn’t like its heavy carriage shift.

The Alpina uses a partial carriage shift (skeleton shift). Will Davis describes it this way:

One notable feature of Alpina machines is that, while they employ carriage shift, only the platen actually moves when the shift keys are depressed. This makes shifting rather easy considering the size and weight of these machines — these are among the very biggest and heaviest portables in the post-1958 enlarged overall size.

He is right.  The shift is light, but the Alpina is incredibly heavy.  I wish I had put it on the scale.

Its lovely clamshell case is arresting.

The case looks like it’s metal, but it’s actually very thin, fragile 1950s plastic.  It has a couple small cracks at the hinges: 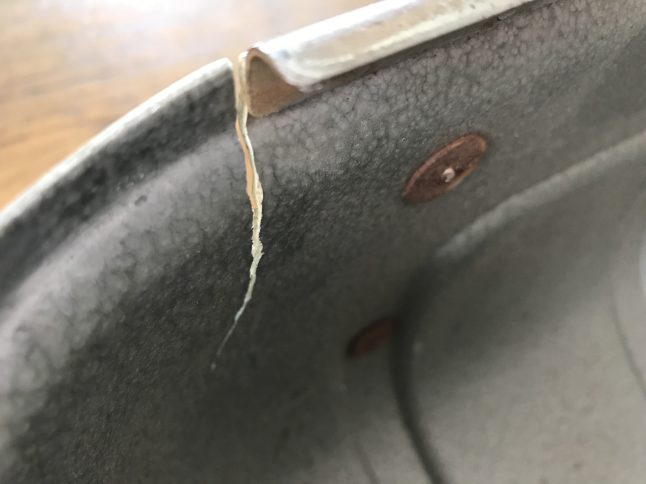 I understand that this type of Alpina case is fairly rare.  I imagine not many of its fragile kind survived the years, hauling superchunk Alpinas. 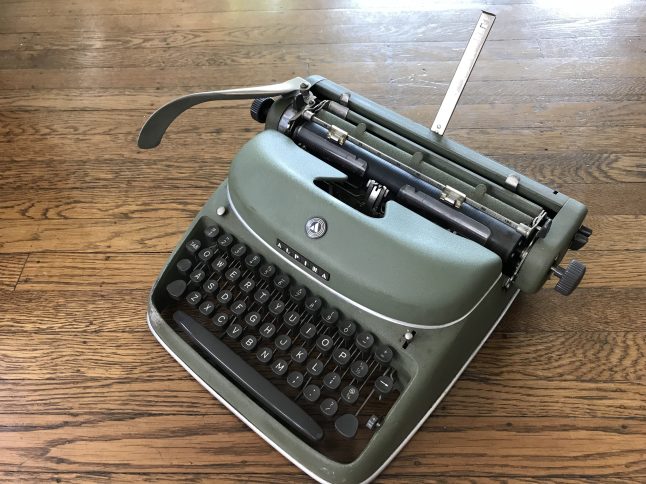 One interesting thing about this Alpina is that it has two serial numbers: one riveted to inside body (#73969) and one under the carriage on the left (#75330).

I took a few more pictures for Typewriter Database and then l lovingly kissed the Alpina goodbye.  I’ll see her again in December/January.

I flew home to Virginia in August with two typewriters as carry-ons.  I’ll be taking them to Herman Price’s Typewriter Jamboree for someone who expressed an interest in them. The Lettera 22 fit perfectly into my laptop backpack.

And the Olympia SM3 fit inside a rolling carry-on.

I have taken typewriters through airports in the past and have been disappointed that I have never had them examined by TSA. This time though, I was waved to the side for further inspection.  I guess one typewriter is fine, but two or more trigger the Typewriter Smuggler Alarm.

I was very satisfied with TSA agent’s sincere surprise when he opened my luggage and saw typewriters. He loved the Olympia (who wouldn’t?)

It is worth that. 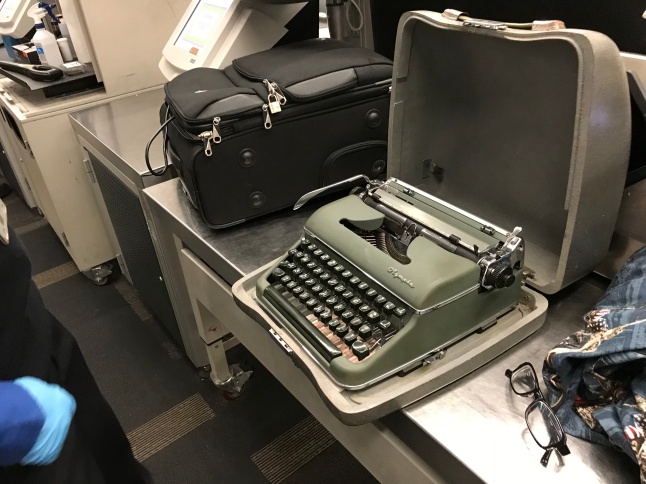 Met with genuine approval by the TSA agent, we were waved through and the typewriters made it safely to Virginia.

Now that I am back in the old routine, I have been thinking  a lot about a tweet that I saw at the end of the summer.  The Alpina typed it out for me.  I think about it frequently in the shower. It’s a perfect way to start each day.