The other morning my husband spotted my dear neighbor Connie standing silently, patiently outside my front door with a Royal 10 in her arms.  She had carried the machine up the street from her house despite the fact that it weighs a full third of her body weight. The Royal 10 had been in the family and no one wanted it (!), so she hauled it up the block to my home for unwed typewriters. I haven’t lived here long, but the neighbors are already on to me, familiar with my strange quirks and enthusiasms.

Always in motion, Connie is in impressive physical condition  – she proudly turns 80 next year!  I frequently see her scampering across her two-story roof, addressing gutter issues. I want to be Connie when I grow up. #BodyByRoyal

I thanked Connie profusely and told her that I could clean it up for her young grandson, but she said no – it was all mine.

Only lacking spools, the Royal 10 was intact and appeared to be in OK typing condition.

And the right shift key has a “Regal Precision Rebuilt” insert: 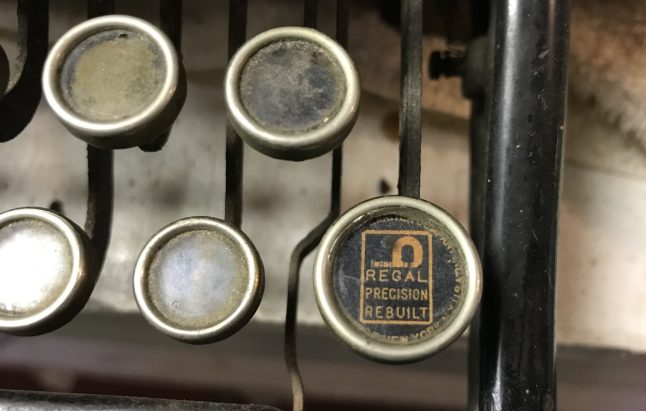 Well, I’ll be darned!  It’s one of those Regal rebuilt Royals that I have read about. I am assuming from the serial number that it was rebuilt about 1937.  Will Davis has a whole blog dedicated to rebuilt typewriters of various makes: https://rebuilttypewriters.wordpress.com/.

On the back I see the faded ghost of a Regal decal: 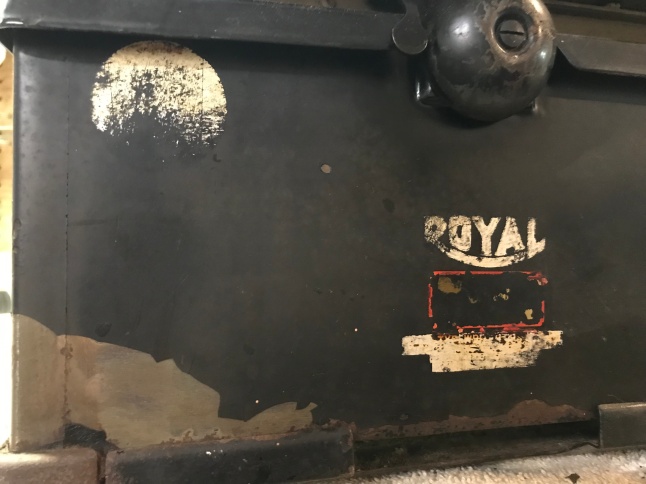 Right now, I’ve got  a lot of Royal 10 action going on in the garage: 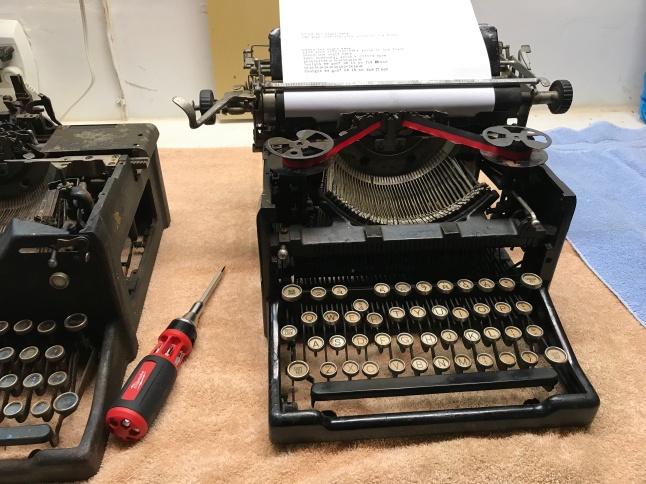 Though I don’t need a third Royal 10, I am looking forward to cleaning up Connie’s Regal and finding a good home for it.

Recently the DC/VA/MD Antique Typewriter Collectors Facebook group reacted with horror at this tweet by a DC area journalist who is starting a poetry project that requires a typewriter:

The typewriter I intend to make final edits to my 66 POEMS FOR 66 SOUTH DAKOTA COUNTIES has arrived in the mail.

I feel almost as excited as the time an accordion arrived on the train for the son of Ludwig Welk up in Strasburg. pic.twitter.com/wCvb9rTkv2

There are Right Royals and Rong Royals.  Most typospherians agree that this is just Rong.

At least a couple of us in the Facebook group have reached out to the poor guy. I haven’t heard back, but thanks to Connie, I have here in my hands a solid piece of iron that may be up to the task.

I took the Regal out to the garage and blew out the dirt.

At some point in its life, the Regal had sat in about an inch or two of water.   It has a bottom cover plate my other Royal 10s lack – this was rusted onto the machine. I doused its screws with penetrating oil and hoped I would eventually be able to peel it off so I could get the rest of the chunks I heard rattling around inside..

As I gently examined the machine, I found a serious problem. 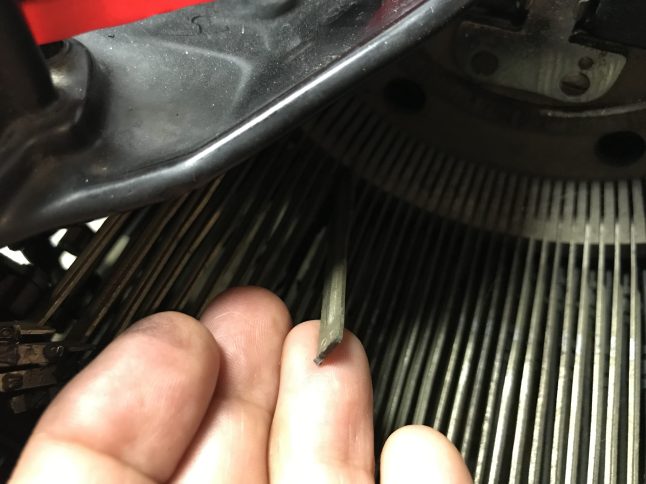 The letter “D” typebar was broken.  I have never swapped out a typebar, but I have a perfectly nice Royal 10  parts machine 10 feet away with an identical typeface and pitch.  I haven’t done this procedure before, but I found a nice little tutorial on YouTube:

I may be wrong about this, but the Royal 10s do not appear to have fulcrum screws that need to be loosened.  I tried to use wire from a coat hanger as my chaser wire, but my parts machine was still too rough and too rusty and I couldn’t “chase” the fulcrum wire.  I ended up used a very thin punch, a hammer and a pair of pliers.  I decided that my parts machine did not need a fulcrum wire and I could really use a decent chaser wire for my tool box. 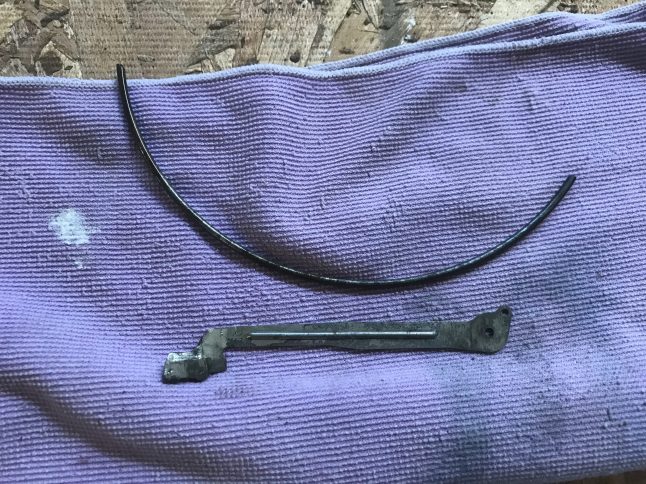 I sanded down my chaser wire with steel wool and greased it up and it went in smoothly into the Regal with the broken typebar.

I made the mistake of pulling back my chaser wire and a bunch of typebars fell out.  I had to slowly reinsert them and inch the fulcrum wire back all the way through.  In the end, everything was fine, but it took a while. This old dog has learned a new trick.

The typewriter also had a line spacing on return problem.  The rubber part of the platen was not moving with the ratchet part.  I removed the platen rod and popped out the platen. Phoenix Typewriter has a video of a 1960s Royal Sabre with a similar problem. My 1920s/1930s rebuilt Royal has essentially the same mechanism and it was the same problem: the “fractional cylinder end” was all gummed up and not springing back and forth.

I cleaned up the fractional cylinder end with mineral spirits until it was springy and reassembled the platen and everything worked fine. I think it had been taken apart before because it’s missing a set screw and possibly a variable spring.  Fortunately for me I had my Manual Typewriter Repair Bible for reference during reassembly because a little tongued washer fell out and I wasn’t quite sure how it went in.

Now we’re cooking with gas.  I was finally able to remove the bottom cover plate.  I put all the bottom parts in a citric acid rust bath for the night. Everything about an inch or two up the machine was rusted including the line lock bail.  It was rusted on its pivots so the line lock was nonfunctional.  I lubricated it and moved it with my hands until it was springy and functional. 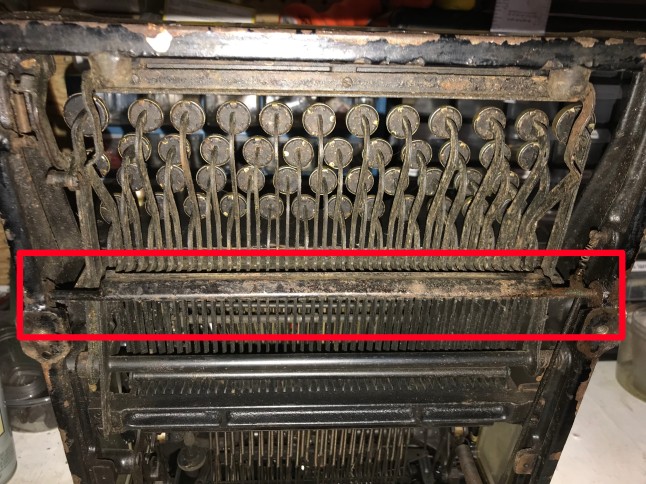 I ordered some Royal ribbon spools for this machine.  I’ll do a little paint touch up, and I think I’ll be done here.  This is a very nice 1920s/30s Royal standard typewriter that someone will love.

Trenton J. commented on my post about dunking a Royal 10 typewriter for rust removal.  I used five gallons of de-ruster liquid.  He describes a process using just one gallon – a brilliant system!

When you need 5 gal. of Evapo Rust you only need 1. I’ve done this. Here’s the deal. Wrap typewriter in double layer of heavy duty garbage bags leaving the top open. Use duct tape to make it form fitting. Now fill all the voids inside with glass marbles or “gems” and/or smooth pebbles. You want to reduce interior volume. Place the whole thing in a big plastic tub. Actually do that first since it will be heavy. Now fill tub with water just below the garbage bag opening. Hydraulic pressure further reduces interior volume. Now you can fill the bag with Evapo Rust. One gal. was just enough for my Continental standard desktop. When finished bail out the water, cut the bag and recover your Evapo Rust.

8 thoughts on “The Regal Royal and a Broken Typebar”